A horror survival game aboard a freighter lost at sea.
Submitted by Jamming Games (@game_jammers), CROYBOY2000, Bat Ship — 19 hours, 17 minutes before the deadline
Add to collection 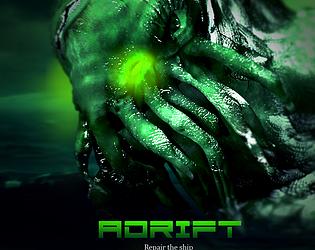 Very impressive work on the environment ! The texture work and refflections really add to the oppressive and decrepit vibe going on. On top of that, the gameplay itself keeps a feeling of urgency, reminding you ceaselessly that you are never truely alone in this vast maze, while giving you time to breath and explore the lore at your Leasure. Excellent entry, highly recommanded !

Thanks for playing and the kind words! Your recommendation means a lot to me, since I think Demoiselle is one of the best entries of this compo!

Environments feel oppressive and abandoned. It feels like a freighter and it feels lonely. Nice mixture of open spaces and confined areas. Impressive sized level for the jam period, although some signage (or a map!) would be welcome in a level this large. 3d design reminds me of Quake 2 and Silent Hill 1 (which is quite a pleasant combination to me). There is some nice varying texturing throughout, but also some plainly obvious hard lines where 3d objects meet.

The story and note system was well done (another reminder of Silent Hill) and I've been known to indulge in Lovecraft. It presented just enough to allow the player to fill in their own blanks. Audio is nicely implemented but it feels like the the 'tense' track is cued a little too often breaks immersion slightly after so long. Also a music track at the game over screen would be a welcome addition too.
The UI looks very smooth and clean here. It all feels real nice, polished, and responsive. I did feel the text when reading the letters could have been a little bigger though. I couldn't help but feel the most fear while repairing things (akin to Alien Isolation). Standing and waiting, feeling like a sitting duck.

The monster design feels slightly out of place due to the style of the 3d environment. It looks good, but it is out of sync with all the other visuals, which might be because of the texture.

There's a lot of good here. I'd imagine most of my suggestions were considered and scrapped due to time constraints but... A map (and possibly way point system?) would do a project like this a lot of good. A conglomeration journal would also be neat to read page by page after collecting them. It'd also be cool to see the monster pursue you in other ways. I'd also suggest some mouse sensitivity and field of view options. Oh and also... not enough game over screens say "YOU ARE DEAD" anymore, so I think that'd be cool. Nice work, guys. :)

I did end up adding a complete journal at the 11th hour as the “good” ending, where you successfully escape the ship, but I agree some more in game GUI would go a long way. Thanks so much for playing and making such detailed feedback, it means a lot to us! (PS: The original screen was in fact a you are dead screen haha)

Really ambicious project following the classic recipe established by Slenderman and the like with a fair bit of interesting information to discover all around a big ship serving as the game scenario. Special props to the music/sound design and atmosphere, you accomplished a really oppresive ambience (in the best sense of the word) that gave me quite the spooks! Cheers <3

Submitted
Amidst the Tide
LikeReply
Jamming GamesDeveloper2 years ago

Thanks for playing, and for the kind feedback! None of us had ever done a horror game before so we decided not to stray too far from the beaten path, and instead focus on leveling up our own skills during the jam. We are all very proud =]

Learning from the jam and making a good game at that is a double win, congrats <3

Hi, I'm Roberto Del Busso, from Dark Matter Studio, 2D Artist of Pixel Artist and Lead 3D Artist, so my review will focus mainly on these aspects of scenery and 3D itself.

I loved the game you guys made, I had a lot of fun getting scared with the monster and discovering the excellent story you folks wrote, the atmosphere was on point and I just have to applaud you for being able to make a web-port of the game and being able to build such a big playable map in 9 - 10 days.

That been said, a negative point I had, the camera doesn’t follow the character’s movement satisfactorily, it’s as if the character walked normally but with a terrible neck pain, maybe removing the momentum the camera has to move to where the mouse would be pointing would help ?.

Now 3D art, again I congratulate the team for being able to make such a large map in such a short time, but precisely that size of map may have detracted from the quality of the work, several textures are "stretched" as if the UV was out of scale in correspondence with the texture, perhaps due to some bug in the texturing software that may have been used, or the lack of necessary backing maps if Substance Painter was used for texturing, perhaps a smaller map could have added more in the matter of quantity of details per square meter and helped in the time constraints to make such map.

As for the modeling itself, I will consider that 100% accurate references of a cargo ship are complicated to find and also to many nuances that maybe not even those served / was part of the crew can catch, besides 10 days is not enough time for a "1 : 1 replica", but to certain things that could be better, like the visual identity of each location, I often felt lost because I didn’t know exactly where I was in reference to where I should go, the use of signs with directions would help to mitigate that feeling a little.

Another point is that there were some "backface culling" bugs in some corridors / props in the scene, one of them being on the galley counter of the ship.

In general, we all congratulate you folks for the game, and I see a lot of potential in future games made by you guys or/and gals !

Best regards and good luck on next projects!

(PS: Sorry for any misspelling, english is not my first language, and thanks from the review of your game too, abraços from brasil ! XD )

Thanks for the feedback Roberto! We’ll try and do better in the next jam! I apologize if it wasn’t up to your standards. I’m super pumped to try harder though!

Cool game! You've built an impressive level in the short time-span conditions of a Jam! Also enjoyed being chased by a big fat Cthulhu through the level

Thanks! After playing your game I felt like kindred spirits, if you don’t mind the comparison. Thanks for the feedback, we had fun working on this one =D