Love is universal!
Submitted by tebell (@tebellgames) — 17 hours, 50 minutes before the deadline
Add to collection 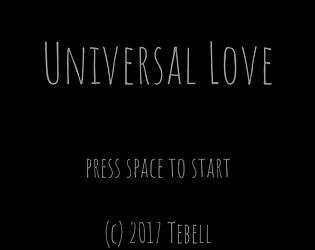 Simple, well made game. I included it in my Strawberry Jam compilation video series, if you'd like to take a look :)

@eevee There's a lot to be improved, but thanks! The artwork and music for this game was first take, so it took me about 30 minutes to finish that. Most of the time was spent learning Lua and LÖVE. I am actually a big fan of LÖVE now, so I will probably be using that in other jams in the future :)

You're 100% correct about the enemy ships, as the arrangement is random. It could probably be solved by checking the position of other ships before spawning, as well as staggering the rate at which they spawn a bit more.

An interesting twist on bullet hell, and I'm a huge sucker for inverting expectations, yess. ♥

I can't believe you did this in a day having never used LÖVE or Lua before? I would probably spend the better part of a week unnecessarily fucking around to produce this.

I suspect the enemy ships can easily arrange themselves in an impossible pattern, but that's a bit tricky to solve.

@Krinn I added binaries for Linux, OSX, and windows. I've only tested in Linux though, so let me know how it works for you :) BTW, the itch desktop app seems to have some trouble updating to the new files, so try getting them directly from here

@Krinn Thanks! I'll check on that now.