Kingdom Of The AntsView game page

a visual poem of doom
Submitted by ATP Projects — 21 days, 18 hours before the deadline
Add to collection 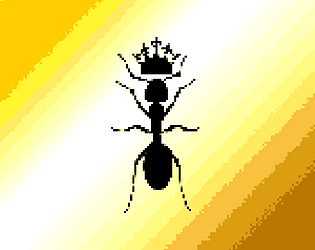 Kingdom Of The Ants's itch.io page

I like the simplicity of the story and how it doesn't bother to explain anything; that makes it tenser and scarier. The pixel art was really effective--the piles of black pixels communicate so much so minimally, and I like how the screen gets covered with ants at the end. The music also did a lot to enhance the mood. (Also great: The text of the menu buttons.) I would have liked it better as free verse than a rhymed poem, though; some of the rhymes like "street/asleep" weren't working for me.

Thank you! I love that you specifically pointed out the fact that nothing was actually explained, it was one of the reasons I had so much fun with it - it's ants, panic, the end. I was really enjoying working on it.

That extends to the rhymes as well, but there is an inner nitpicker in me that agrees with you on the rhyming elements - some rhymes like beneath/teeth almost rhymed too much for my taste, and some like the one you pointed out, or down/now were too far apart, as well as things like phenomenon/spawn where the length of the last syllable isn't the same. Sometimes I needed to split the sentence awkwardly... I think I mentioned it below somewhere too, the rhyming is an opportunity for endless tinkering, there is this hope that with time I could conceivably find the perfect constellation of rhythm, structure and information for each of the backgrounds, but yeah, I do get what you're saying.

Either way, I'm glad you had fun with it, I really appreciate you taking the time and sharing your impressions and all the kind words on the other bits of the game - thank you for playing!

This was really cool.

I liked the low res visuals. They gave me a "can only vaguely make out what i'm looking at but maybe that's for the best" kind of vibe, increasing the sense of dread. The ant scenes were really effective.  So much expressed with so few pixels.

The text effect was great. Brought a good sense of motion and rhythm. Writing wise, some of the rhyming felt a little forced to me, but i don't read much poetry and am no poet myself so I'm not sure how much my option matters in that regard.

The only thing that let the game down a touch for me was the rounded edges on the text outline. Felt incongruous with the rest of seemingly meticulously well crafted look of the game. But I'm assuming this was a Ren'Py limitation? Feel like I've come across that in my dev travels.

All in all though, great, compact, well crafted experience. Nice work.

Thank you for giving it a go and commenting! I had a short time frame during which I could make this in September, so this sparse style worked quite well for me. I did try a few ideas for the text vs. background, at one point I had sharp backgrounds and the text was really bad to read, and while experimenting I found that a very soft blur was able to create enough contrast so I didn't have to use a dimmed "textbox" which I really wanted to avoid.

The rounded outlines are an interesting observation, I didn't notice that effect until just now, I do indeed think that the outline is rounded because of the actual resolution which is obviously higher than the "pixels" on the screen. So yeah, until now I thought the only "high res" element was the soft focus effect, but the rounded edges are in fact another one.

As for the rhyming, I really enjoyed finding out ways to express things with a similar syllabic rhythm, and having to try and re-try ways of saying things so that I could fit all the information and emotion in, and even trying to avoid same words as much as possible - but indeed it needs to work with that sort of "front loading" (not sure what the term is actually) of words or bits of information. I was quite impressed with how streamers have been able to intuit that some of the info is still not complete and change the tone of their voice waiting for the other lines... poetry or rhyming lyrics definitely do benefit from multiple readings, and I also definitely realized that given more time I would tinker with everything into eternity, and I certainly did throw away a lot of rhymes and sequences that felt forced or awkward, so the result is the sort of thing where I had to draw the line and let it be.

Once again, thank you, I appreciate the comments, and I'm happy you liked it!

The soft blur was a nice touch. Gave the images a bit of a 'look' beyond just being pixellated.

Regarding the rounded edges on the text outline I tend to hyperfocus on things sometimes and notice stuff like that and am completely oblivious to other more obvious things. It's probably not a problem, or something that any other human being would notice :D

My comment on the poetry may have been a little harsh. As I said, I'm nothing of an expert, and as such probably shouldn't have commented on it. But yeah, hopefully it wasn't taken to heart too much.

Technical comment: Ren’Py generates a zip file that works on both Windows and Linux, but if you generate the zip file outside of Ren’Py it can get tricky to run on Linux, and I can tell you did that (either that or you removed files and added them back in). I had to right-click two files and mark them as executable and then it finally worked.

Halloweeny?: Did the ants start invading on the 31st of October of some year? Idk. But I guess this VN is spooky enough to recite at a halloween party.

Scary: Pretty. I don’t think I’ve ever seen vampires, werewolves, demons, ghosts or witches irl, but I have seen ants.

Monsterous!: Those ants are monsters, or maybe it’s the pack of them that’s one huge monster. Oh wait, hadn’t I decided that this was the category where I’d rate the audio? There’s music, but no sound effects, and no VA either. Not that the story mentions things making a lot of noise (well, there’s the phone ringing, I guess), and there’s no direct speech dialogue between characters, which means there could have been some sound effects but VA doesn’t really make sense… except it would have been relatively easy to add since there’s only one character. I mean, narrator’s aren’t that easy to voice, but the fact that there’s only one character means you don’t need a lot of actors, and also one person could read the story from start to finish in one take and that would technically have been enough. And yeah, I could see this VN turned into a song, in which case VA and music would kinda be the same thing. Well, I’ll have to think about this before I decide exactly which rating to give in this category.

Candy!!: Do ants eat people as if they were candy? Or maybe the art is meant as eye candy. Well, the art is sorta good, and looks quite consistent throughout the story, but it also feels like someone went for a walk and took a couple of photographs, then painted some ants into them and applied some sort of blur filter to hide the imperfections. So good, but not mindblowingly good art.

Fun: It is an interesting VN, even if I think a part of what makes it interesting is that it’s poetry.

And yeah, I’m not sure exactly how the category names are meant to be interpreted.

I realized towards the end of the jam that the game had no jam logo (just a normal mention in the credits), and added some lines to the script file as well as the logo file itself, which I then just added to the PC file, so that it would meet the requirements.

Thank you for the information, I now marked the jam logo version as Windows only - the original versions are untouched and should work no problems.

And thank you for playing and putting up such detailed comments, I really appreciate you taking so much time to do this!

You should make this into a heavy metal song! Enjoyed it:)

You know, this is such a great idea that I'll be browsing for heavy metal loops to be able to karaoke it, just to see how it feels. This kind of thing would never cross my mind, but now that you said it, it immediatey speaks to me as a great fit!

Kept me reading until the very end. I really like the visuals and the poem was well written, considering I don't know much about poetry. And I love this type of horror. Something familiar we all know turns against us.

Thank you for giving this a go and taking time to comment - I had a lot of fun working on it, so I'm happy it translates into people enjoying it for similar reasons. Thank you for playing!