Submitted by Deus — 1 hour, 15 minutes before the deadline
Add to collection 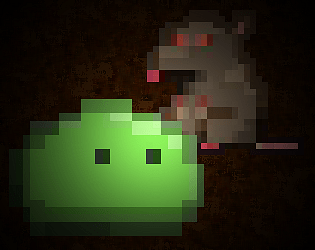 I had a hard time figuring this out... but you did a good job nonetheless!!!

thank you so much :)

I really like the gameplay and the concept is solid, though the UI is a little clunky.  I ran into a few scenarios where the layering was off, and in one case, I couldn't see the dialogue of a character because I initiated the conversation with my inventory open.  That said, I quite enjoyed it overall.

Thank you. Ill fix that bug inventory bug  tonight. Do you have any suggestions for less clunky ui? I am glad you enjoyed it :)

I think some modifications to the commands would be beneficial, as it currently takes two actions to give a command (scrolling and pressing F).  Perhaps just using the wheel and having the slime follow the highlighted command or having a way to select commands using hotkeys or using only the mouse might make it a little easier.  I think the main issue is just that using it requires both mouse and keyboard controls.

Very confusing. I have no real idea what I was supposed to do or what even was going on at most times. I guess the slimes and rats were enemies. There was no indication at all that they were hurting me but the game suddenly just ended so I guess they did. I just kept wandering around randomly picking up stuff I did not know what it was or what it did and finally met my end by some slime I didn't know was hurting me.

The (keyboard) controls were awkward. Switching the commands (which I didn't really use at all because I had no idea what they did) with mouse wheel was not great at all. Probably would have been better with pad but didn't even try because you specifically mentioned xbox controller. And now I tried again and PS4 controller (on mac) worked just fine. Even the button mappings seemed the same. Did you use some Unity input add-on like InControl or that other one which I can't recall the name of?

The sprites looked good and the music was sweet (could have looped better).

Ahh yes, I wasn't really able to add in extra things like buttons for the skills (which would make the switched less awkward) since I ran out of time, or clicking for the skills to activate, or some kind of visual cue/ sound when using skills. The first skill is follow, then attack, then wander. They are commands for the slime.
The xbox one controller was tested, and didn't have a ps4 around to test, so I only mentioned that. I used unity's crossplatform input manager which is part of standard assets.
Yeah there is no real goal of the game, unfortunately. I ran out time for that too. At the moment you can just kill the rats and slimes, make the slime bigger, collect fruit and talk to NPCs. My original plan was to craft new slimes or evolve the slimes through battling different creatures, to give them new abilities. When the slime dies the level restarts (I should of put this in the tutorial text).

I'll design better levels next time :) My original plan was to have a  few levels and progression of some kind. Thanks for the feedback.

Oh nice, I hadn't noticed that Unity had added such a thing to standard assets at some point. That will make life whole lotta easier. Just used your game as a test case, Firefox (on OSX) seemed to flip A and B buttons. Still, seems like a nice addition. Thanks a lot for the tip!

I see, it was the slime dying, not me. Makes sense. I did figure out they were the commands for the slime because of the follow one but didn't know what the two others were. Guess it was left on attack since my slime was fighting the ever increasing number mobs.