A short game about a smart house.
Submitted by Drone Garden Studios (@Sciaenops22) — 3 days, 7 hours before the deadline
Add to collection 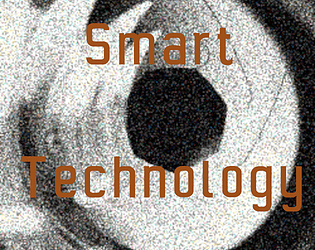 Very nice! Really enjoyed this one. Had a good hook and the conversations were fun to navigate. I also liked that there  were some deeper creepy elements on top of the more obvious ones, that I won't mention here :)

Thanks for the feedback!  Glad to hear you enjoyed it!

Immediately went to the kitchen and ate a sandwich on my first playthrough - 10/10 would fatal error again for such a delicious meal...

Playing through some other endings now, I love the art and sound design!

I love your style of story telling, if you're ever interested in collaborating sometime to make a game, let me know! I'm a CS student so I enjoy the programming portion. :)

Thanks for the feedback!  I'll definitely keep you in mind for future projects that are too big for me to handle on my own.  ;)

I'm not sure how many endings there are to this, but after encountering a couple of bad ones (I figured having a sandwich was a bad idea... but what can I say, I'm a masochist xD) I managed to survive my encounter with Agatha :D I'll probably play around a bit more later to see some of the bad endings that I'm pretty sure I missed cos I'm a sucker for bad endings, haha.

Anyways, I enjoyed the scenario + trying to figure out the correct sorta order to do stuff in order to avoid being neutralised :3

Thanks for the feedback!  Glad you enjoyed it!

VERY cool concept! I love the visual style, and the deaths are very creative and well-written! I do wish that I could scroll back more easily. On one of my runs I misclicked while getting back to the server room and accidentally triggered an end-game scenario, and I couldn't roll it back, so I had to run the entire game from the start again. But a fun game with a great climax!

I'll fully admit, I put a limit on the rollbacks so that people couldn't cheat and scroll back if they didn't like the choice they made (I thought that would ruin immersion, so I wanted to head off those complaints before they occurred).  But I didn't even consider misclicks.  ^^;  I'll have to keep that in mind.

I had a feeling it was for that reason! I play a decent amount of Ren'Py games, and from a player perspective (and as a notorious completionist who doesn't want to miss out on dialogue branches) if I'm confronted with a good and a bad choice, I'll usually pick the bad one first to see where it goes, then backpedal and proceed playing from the good choice onward. I still get to experience everything, but it just takes less time than restarting and skipping through familiar text. But you're right that there is some amount of immersion lost!

A compromise may be to streamline the playthrough experience in other ways. Maybe make it so the room introduction text only appears your first time through the room, so that players speedrunning back to where they were don't have to see descriptions of the reading room over and over. Or make more rooms accessible at a time from a given location, so some of those transition rooms can be skipped? If you have 5-6 different end states for people to potentially see, little changes like that can add up for your diehard players.

These are all great ideas, and I'll have to implement them in my games.  I'm still new to the whole game development with RenPy thing (and game development in general, tbh), so this is all a big learning experience for me.  Super grateful for the advice and feedback!