Submitted by Thundercloud — 1 day, 17 hours before the deadline
Add to collection 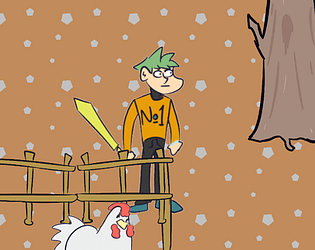 Hero Ranger and the Wrath of the Mad Farmer APOCALYPSE's itch.io page

Any additional information for voters?
Hi

Thanks for the easter egg!

Wow. This is a great game that deserves a lot more attention than it has gotten. The story is amazing. The gameplay is very solid. The use of music really helps to heighten the mood. The cinematic/dialogue sequence are good, and the whole thing feels very well done.

All of this comes to create a game that really fits the bill of this jam. It's short, but never gets too boring either. Talking to different characters and following the quests was great. I cannot sing this game's praises enough. Well done for completing this game within the week!

I think the art style, plotline, and gameplay are basically spot-on for this jam, conceptually. It's ugly, but not so much that it hurts to look at. The plot makes no sense and there's not a lot of substance to the gameplay, but that's fine. I actually found it a little dry, but this is the So Bad It's Good Jam, not the Parody Jam, so that's fine.

Unfortunately, I found it too buggy and unbalanced to actually be fun. Hit detection is not totally broken, but broken enough to be frustrating. Four hearts becomes zero very quickly when you're barely faster than the enemies and have no way to restore them. And every time I die or the game bugs out I have to start over from the very beginning, which was tiring the second time and ridiculous the third.

I got to the boss battle, but never finished the game.

I intentionally made the hitboxes about 1.5 times bigger than the enemy removed hit sound and altered the speed so it looks like a bad flash game of 2011 of so.

I can fix it though if it is unplayable, give me a sec