A puzzle game, where you, my Lord have to place your army in order to limit the influence of your vassals.
Submitted by lazarow — 4 hours, 5 minutes before the deadline
Add to collection 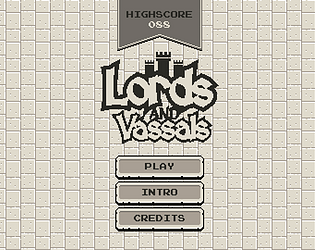 Which parts of the game did YOU create BEFORE the jam STARTED?
Mostly none, I've got some very general code for Phaser.

Which parts of the game did you NOT create?
Music & sounds, I've also used 2 fonts.

How was your jamming experience? Did you enjoy the theme? Were you able to produce more or less than you expected?
Yes, I did, I've produced less than expected.

I really enjoyed it! The animations in particular were delightful. I do wish that you could toggle the tiles to a third state to indicate that you know there shouldn't be a banner there, to make it easier to remember what you know.

Thnak you, Bro. I totally agree that I've should put more tile states that enchance the gameplay and make the game more accessible. In my original idea (i.e. when I was thinking, I had a lot of time), I thought about more types of tiles, like dragons and wastelands to make the game more interesting.

The intro was confusing, but once I got the rules it was great... the procedural generation was basically unnoticeable - it felt like perfectly good handmade levels. And I quite liked that puzzle ruleset... I don't think I've ever played Kuromasu before.

One thing I'd suggest is having a logarithmically decreasing score so I don't get zero if it takes me a while to solve : (

Yee, I've tried to merge the Kuromasu rules with my basic storyline - it didn't end well xD Next time, I promise I will implement logaritmic decreasing for a score!

Thank you for your kind words.