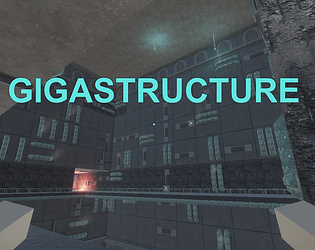 Thanks for making this! I liked zipping about the oppressive corridors with the grappling hook and then having the huge open shafts or even cavernous voids loom -- reminded me of the original Unreal Tournament in the best way. Would play more with some new features, keep up the good work :)

Cheers, thanks for the comment! I'm working on a proper game using this generator, hopefully out later this year-

Really vast world! I included your creation in my PROCJAM 2020 compilation video series, if you’d like to take a look! :)

This has such great atmosphere - the structure feels appropriately oppressive, and nice touches like whirring vents and hissing steam really bring it to life. Especially zipping past them at mach speed with the grappling hook, which takes the tedium out of navigation; each dead end was kindof invigorating, giving me a push to track back and try other paths. It would be awesome to see the turrets fully implemented - as soon as I saw one, I instinctively shot because it simply looked evil, but it would cool if they were out to get you too. Great work!

Thanks for the very informative comment, and glad you enjoyed it! I'm trying to spruce the game up a bit post-jam, so I'll definitely keep those things in mind~

This is great - the grappling hook is my go-to for navigation. The tall shafts are exciting to stumble across. What's the way to get the exterior view?

Thanks, glad you liked it! I agree the shafts are kind of a breath of fresh air after all the tunnels. If you mean the last screenshot, that was actually from a bug where I clipped through the map geometry haha. The other shot is from the unity scene view. Currently the only exterior view is with the map, but I might change that in the future