Can I Get A Selfie?View game page

Keep the star safe, he doesn't like fans
Submitted by ThakaInsaan (@thefsamar), revulpine — 1 day, 10 hours before the deadline
Add to collection 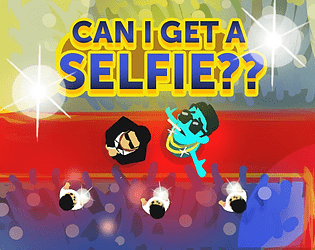 Can I Get A Selfie?'s itch.io page

What did you update?
Reduced difficulty, made control scheme more intuitive,

I think there's a lot here. I'll basically second what Xascoria said. He really nailed it. The controls are ok, but still somewhat difficult, and the tutorial needs more work. Literally, you need to add arrows pointing to the rope things and a glowy border around them, so players can understand what they're for. That said, the game is pretty funny. Good job.

the interaction for ropes many people couldn't see it as well, we will improve the tutorials , thanks for your suggestions and also for playing.

I quite like the idea, but the execution could use some work at the current state.

- The turning speed of your character feels too slow for me, makes the control seems unresponsive at times

- Player's model has no collision, you can walk on walls and basically everywhere

- It took me actually quite a long time to figure out that the air hockey paddles were supposed to be stanchions and velvet ropes, maybe reword the instructions on that a bit?

- Pathfinding is very wonky atm, especially the last stage where the idol would go for the pink guy (who's identity were never explained), since everyone is blocked by the velvet ropes, it actually makes it really hard to navigate him to the exit. and I'm not even sure if the fans are going for him at that level tbh

Thank you playing and also taking time to share your feedback, we will be fixing them accordingly and post an update soon