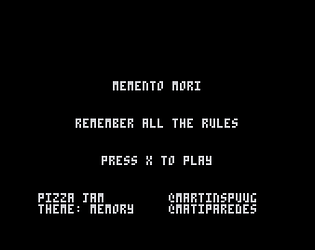 Really interesting idea! I included it in my Pizza Jam 2 compilation video series, if you’d like to take a look. :)

Neat little game! The rules were pretty complicated, but the fact that they didn't change made it relatively easy to complete on my second attempt. The music has a small loop region, but it works fine since the game isn't too long (it sounds really nice too!). Overall nice concept. Also, 9 SECONDS BEFORE THE DEADLINE... you guys are insane. Nice job!

Fun memory game, I particularly enjoyed the soundtrack. Even though it was a relatively short loop, it's very well done and sounds great. Great use of the memory theme. The rules were a bit difficult to remember at first but with some practice I was able to clear the game. Very nice!

was a fun small game!

Glad you liked it! Thanks for playing :)

Great usage of a simple memory mechanic! A little bit like "Papers, please!" with all the rules you need to remember :) I really like it!

Thank you! We had many more rules to remember in mind, but we had very little time. Barely made it! We can add more rules in a future.