Submitted by AR Borno — 1 day, 19 hours before the deadline
Add to collection 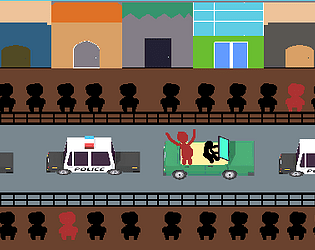 Did you use any optional theme? If so which one?

Didn't use an optional theme

What game engine did you use?
Gdevelop

Did you have fun? :D
Yeap

This game was not made for this jam. Honestly it's not cool to try to trick people into playing your game. Read the jam rules before submitting anything.

Submitted
you are in charge
LikeReply
RodiiSubmitted168 days ago

Cool twist at the end! Made me want to see what the other endings were like. There are a couple issues with the sound mixing, the sound effect at the end of the rally is really loud and jarring even though I was expecting something like it. The music looping is also very noticeable at times, it seems to cut out and restart in the middle of the song sometimes.

The dialogue was also a little stiff I found, and there were a fair few typos, but the story itself was pretty interesting