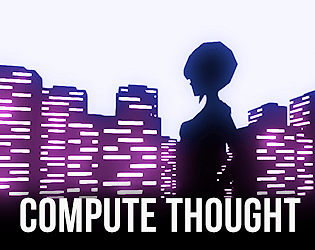 Have to say I love the opening to this, a great moment! Otherwise I really dug the atmosphere, but felt like the story ended really quickly - alas, game jams :|

I love the style and atmosphere of this. Really great use of light and camera angles. It seemed a shame that so many objects could be lit up by the cursor but not interacted with and I just hope that's a sign that you're planning on expanding the game. I'd love to see it fleshed out - it's a brilliant premise!

The visual style & aesthetic is utterly stunning, and that's what drew me into this game! And the style is solid throughout. That said, some of the later game felt like half-baked versions of otherwise really awesome ideas. Using a physical keyboard to input commands? Clever! Too bad it was only used for one section. The story's core dilemma of an android killing someone to make their mind immortal? Brilliant! I just wish it had more screen time. If this game jam had run longer, gave us more time, so you could've fleshed those parts out, I'm sure this game could have been made that much more awesome. Even though it's quite awesome as-is.

Sweet graphics, awesome game! I included it in part 1 of my Nar8 Jam compilation video series, if you’d like to check it out :) http://youtu.be/-Vf43eyLuSE