[Devlog] There Was Never Going Back

Hello! This may be a late Devlog entry and to be fair the only entry but it's only purpose is to show you whats coming.

Story Behind My Choice

If anyone knows a guy called Owl Turd Comix, he creates comic strips and lively or unsoundly stories to go with them. Could've been a year ago (it's what it says), but he created this one shockingly heart breaking pixel-art style comic strip and I've contacted him and asked him if I could make a game based off it. He agreed! Allowing me to use the concept and even the art to go with it. Considering I'm no good at making assets, I've been doing pretty well with what I have now.

I would show you guys the full comic strip, but there already shows early game spoilers so I wouldn't want to ruin the shock. But worry not, It will be shown in the game.

What I will do is show you the first panel, and a gif if in game gameplay. 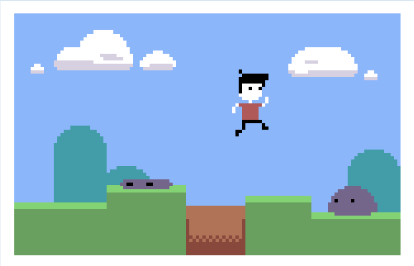 This is the first panel of the comic strip.

Here is what I made so far using intensive photo editing to extract everything from the comic which was sorta hard because, yes the artist drew in pixel art... But the aspect ratio was bizzarre, some things (for example the clouds) had un proportioned pixels. I can further explain if that doesn't make sense, it's not the point though.

Also don't worry about the vignette, it's current purpose is only in early game.

Here are two samples of music I've made using PulseBoy.

Story of The Hero

Literally what it seems. Basic adorable classic mario jump on platforms, kill enemies... Not being able to scroll left any further than you've scrolled right... Not respawning after dieing... Essentially completing the game in one go, after all. You only have one life.

I hope you enjoy my game once completed. If anyone is offended I've used someone elses work to base my game off of, I'd like to apologize in advance. The artist is in fact eager to play my game.

Thanks for reading, have a fun time developing your own games, and playing everyone elses!

OHHH I remember this comic! It will be cool to see it in motion form.

whoa yeah ive seen this around!! a very cool concept for a game, and very fitting putting it in the medium it was playing with.

EXCITEMENT LIKE WOAH. really psyched to see your re-interpretation of the story-!

Ah I remember this, and you managaed to match the artwork to a T.

I think this would make a real good game.