MyFirstGameJam submission, a fun little action RPG to delight your day.
Submitted by HerbsterGames (@HerbsterGames) — 2 hours, 11 minutes before the deadline
Add to collection 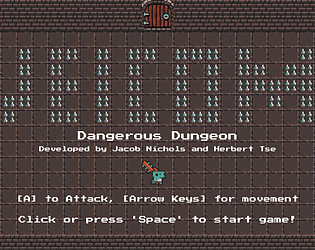 Feedback is that I can't attack when being attacked. Also I'd like to move backwards while attacking on the other side. I can only stand still or run into the mobs to attack.  It's got potential if the controls are improved, speed it up. I like your variety of monsters and your health pickups. Add a couple of SFX too and over this could be more fun.

Thanks for playing and the feedback :) I would definitely go back and see how to improve the control more!

I can see a lot of systems went into this game, including player and enemy's health systems, stun, invincibility timers, and very solid graphics and such.

One improvement is that sometimes i cannot attack while some other times i can.

I think you have disabled attacking when player is damaged? I don't mind it, but it would be nice to have communicated it better, for example, by hiding the weapon when being hit, and only show the weapon when the player is allowed to attack.

The difficulty curve is also ok. There are enough health pickups to feel challenging. The weapon swing is fair to play, with enough penalty if swung aimlessly, but wide enough to actually hit things.

Very nice diversity of enemies. Each are very distinguishable.

Overall, very nice game with a little bit of "The Binding of Isaac" vibe. Keep on.

Thank you very much for trying out the game! There are so much more we wanted to put into the game, but we did want to make sure whatever we put in are as solid as possible rather than putting too much in without being able to finish :)

And yes, we did disable attack when player gets hit, so player can't just always spam attack and need to position a little to be effective...

About your worry on spamming attack, maybe you could allow it with a timer in between attacks while being attacked?