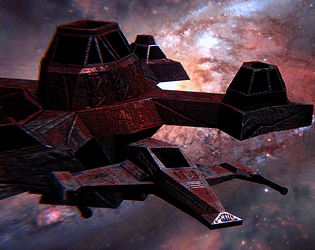 The 3D is great, really the games strongest point, good textures and think you managed to make the pirates rather distinctive from the player ship/station. Also the main menu was rather fancy, and gives the player a good first impression. The rest, however, is lacking.

The game-play itself works, but its rather boring and lacks impact. The mouse-only limitations make a free-movement top-down shooter rather difficult in the choices available for how to move and shoot, but then more focus need to done too how to make that limited control feel more dynamic/good. With a control style like this, you expect that the main tactic would be to build up speed, let go, to then fly/strafe by the enemy while aiming and shooting (this is even supported more with the help of the mini-map, which is great btw, so you can plan where to go and pre-plan the speed build-up). However, you cant do that, as the player-ship feel extremely sluggish and basically stops instantly as soon as you stop holding down the move-button, this is made worse as most enemies aim directly at you. So you ends-up having no other choice then to take the hits.

The controls at the moment does not give the player any options on how to tackle the enemies in effective ways, leading the game-play to just feel frustrating and unsatisfying. I'm in a space-ship! I want to be able to go fast and out-maneuver enemy pilots.

If you keep the controls as they are now, I would recommend speeding up everything, make the player able to gain more speed, and KEEP the speed when no longer holding down the move-button (you can easily just slow down by accelerating in the opposite direction later). OR, change the controls to that the ship fly to exact point you CLICK with the mouse button, this way you can set a "way-point" to move to, and then rotate+aim+shoot at the enemy while the ship auto-moves.

The game also just lacks the feeling of "impact". The laser shoots at the moment do not feel or look very good, there is little to no feedback for hits, the feel to slow etc. The enemy ship explosions feels lagy and stiff. Same goes for moving the ship, aside from the sluggish feel, the sound and visual effect of speeding up was honestly annoying, I found myself just stopping in-between the waves to avoid hearing the ship.

I hope was not sounding to harsh, just wanted to give a honest impression on what can be improved. In the end the game works! and the 3d art is awesome. Honestly, the game-play itself can be made so much better with mostly some number-tweaks, so in the end, great job!

I really like the artwork. The 3d models felt really nice.

Game-feel could use a few tweaks. Some kind of audio cue and pop effect when a bullet hits a target maybe? Hitboxes felt a little off.