Last rad standing is a top-down survival "shooter" made in 48 hours for mini jam 14
Submitted by Logic Leo (@LogicLeoYT) — 1 day, 4 hours before the deadline
Add to collection 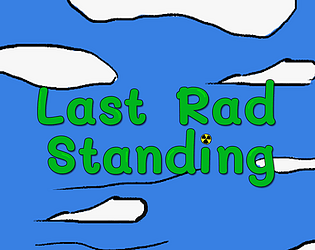 Difficulty of jam
I had a blast during most of the jam, while drawing and animating i was watching some horror movies on netflix and when programming i was listening to some good music.

The only hard part ( took about 5 hours to fix ) was that WebGL does not display video like it normally should. So i had to do some shennanigans (thanks to adam_sgil on the unity forums) and managed to get it working by linking the video through the streaming folder. That beginning intro was crucial to tell the story of the world so i had to make it work.

Great game! You actually made me feel bad to be a can of toxic radiation. Those elements are really mean. If I could shoot at a faster rate it might make the game a little bit better. Cheers!

thanks for your feedback and for playing it :D

The art, sfx and music have a lot of character - they all fit a similar hand made feel. love that sound effect when you defeat an element haha.

thanks :D. i was always afraid of drawing and wanted to just buy assets and stick with programming only, but now i'm feeling like i want to be better at drawing cartoons, so i can work 100% on my own game.

Nice! I like the atmosphere and the humour! I also like the idea to be the last radioactivity barrel on earth ^^.

Thanks! it was really fun to work on this