Submission for a Game Jam
Submitted by Elric Murphy — 1 day, 5 hours before the deadline
Add to collection 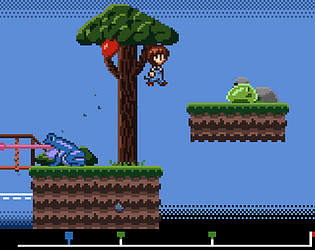 Nice animations and controls. A well thought level design. Atmosphere created by music and color scheme is awesome. You did a great job making this in a weak. Keep it up .Overall Super game.

Sprite work and sound were great. The varied environments kept the action interesting, and OH MY GOD! I HATE THE MIMIC APPLE SO MUCH! hahaha

I think I beat it in a little under 200 seconds. Well done.

I rated before and somehow forgot to leave a comment! So I play it the second time :P I like the music that makes it feels like an RPG. There are many enemies but if I am somehow able to defeat them it would be better hahaha cause I suck at dodging them. Also, great to be able to choose characters from :) Nice work!

Haha!  Maybe when I turn this into a bigger, properly designed game I'll implement some way to fight back.  XD
Thank you for playing!  :)

Good game! Me and my brother completed it in 961.

The game is neat and entertaining. However I'm just so bad at gaming that it took me an hour to finish the  whole game. ToT

It is beautiful and relaxing, very good music and level design. 👌️

Submitted
The search of Arnau
LikeReply
KKSubmitted2 years ago

Nice three type map design, but it is no different of ability for four character?

From the start there was only Col and Roz, and the game was initially going to have a 2 player option.  Unfortunately, I couldn't get the multiplayer setup in a timely fashion, so that idea got scrapped; and at the same time, I figured I'd add in Zak and Sue just because I liked the idea of putting out more than just 2 character appearances for the player to choose from.

By this point, most of the level design was already established, and so giving the characters different movement physics wouldn't have really worked out.  Although I've been contemplating putting out a full/properly designed game based on this project, where I'll maybe implement that.