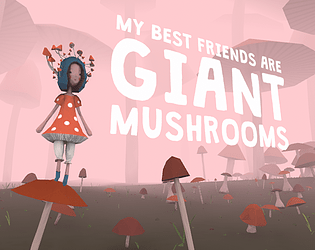 How does your game fit the Magical Girl Genre?
[THIS GAME IS VR ONLY! YOU MUST HAVE VR TO PLAY THIS GAME.] Mirabella is a magical girl who can harness magical energy to grow giant mushrooms that she can jump on. She can also grow tiny mushrooms.

Which genres from categories A and B did you choose?
This game is a tower-defense platformer rhythm game.

How does your game mash those genres?
It is non-violent and feel-good, so the tower defense and platforming are not stereotypical. She grows mushrooms strategically using a limited amount of magic to keep her other mushrooms from being eaten by deceptively cute caterpillars. She plants the mushrooms to act as a wall to slow down the advance of the caterpillars to buy her time to do the rhythm aspect of the game. She grows mushrooms at strategic locations to jump on to catch the magical orbs which drift along in beat with the music. Tower defense to make it easier for her to receive the musical orbs, which may be higher than ground level. She's essentially building her own platformer through the mushroom towers she grows. She gains extra points and magic when she catches a magical orb at its designated position in the music.

Were the graphics/audio assets for your game made during the jam?
I made the graphical/art assets during the jam. The songs and sound effects are from third party sources. See the in-game credits for the complete listing of audio used.

I played this on a Quest 2 via Oculus Link, and I played the jam version. I found it to be a very neat, if flawed, VR experience, and it's a shame that very few people will get to experience it.

I'll start off with the good part: the graphics, music, and overall design is stellar. The limited palette, fog, and solid colours work well together and give the game a unique look. The airy music goes well with the visuals and creates an inviting atmosphere.

The gameplay... I think it has elements that work, but in this case the sum is not more than its parts.

One major issue I had was that the pointer has a limited range, and it's way too short. I pretty much had to stand on top of the spots to hit the notes and sometimes I'd move too far away, and then Mirabella wouldn't quite make it onto the spot, and I'd miss notes. It was really hard to see what was coming because I had to stand so close, and I think it exacerbated the complexity issue mentioned below.

The big issue is that, at least for me, it's just way too intense and complex for a VR game. Getting Mirabella to hit the notes is a pretty significant challenge in and of itself (though I'll be the first to admit I suck at rhythm games).  Trying to hit the notes and also build platforms and also defend against caterpillars and also manage limited magic is just way too much to handle at once.

It took me a while to figure out how to grow a mushroom (maybe a prompt would help?) and while I was trying to figure that out, I was missing note after note. I never built more than one mushroom; I didn't see how I could tear myself and Mirabella away from the notes to build elsewhere and wasn't sure I could get her back up on the first mushroom I built. In fact, I wasn't even paying attention to the amount of magic I had or what the caterpillar was doing.

I think that it presents itself as a very relaxed and chill experience initially didn't help; I kind of set my expectations wrong after the menu and first level. Maybe this is the experience some people are looking for, but it's not one I was prepared for or expecting.

Part of might be pacing, too; the mechanics are introduced too quickly to really get past the still-figuring-stuff-out stage, and maybe if the notes were slower or done in waves it would give the player more time to play with the other mechanics.

All the mechanics are executed competently, and I think some of them would be a lot of fun on their own. I had fun with the first stage just catching the notes, and I think having premade platforms to jump between would be really fun. I think a VR tower defense game where you stand up top and guide Mirabella around building mushroom towers would be really fun, too. With everything thrown at me at once, though, it just becomes unmanagable.

As an aside, I love the credits on the rocks off to the side on the main menu; that's the kind of diegetic UI that only makes sense in VR but makes so much sense in VR.

It seems to be quite well polished, with proper menus and everything, but doesn't seem to have a stage select which is something I'd really like to see. It also didn't show the controllers when they were put down, but I'm not sure if that's an issue with the game or an issue with my setup.

Finally, I have to take a moment to mention how impressive this is technically. It's not only a VR game, but a mechanically complex and very polished VR game, put together for a one month game jam. I've noticed you basically pump out games; how do you manage that? I only manage a handful a year, and they're not this nice.

Thank you for playing and sharing your feedback!

i borrowed a Quest2 to play your game ,and here is my review.

The game is calming and pretty. with lowpoly cute models ,peaceful music, and warm environment, it creates a perfect atmosphere for a game about a little girl with small magic power that can grow mushrooms and have fun.

the control is easy to learn, i quickly understand how to "climb" the camera view, and guide the girl to walk and jump. i have no problem with the level 1. But since level 2, i have trouble catching magical orb, as it requires player quickly interact/creates 3d platforms instead of just jumping and moving. And i end up messing up the camera control and player control a lot of time.

I guess it will be better if the level 2 is about static platforms and doesn't require player to grow mushroom. Or there should be some timeless transition puzzle level with no rhythm element, so that player can send as much time as they want to practice how to grow mushrooms and jump on it. i know the player technically can freely walk about to practice before steping on the start button, but i guess lots of players may just start the game, probably not even read the tips.  (But again, i don't play VR game a lot so maybe it's just my problem)

Overall i think it's a wonderful VR game. Good job.

PS: it feels weird when looking at worms crawling in the area that is supposed to be my stomach.

Thank you for borrowing a Quest 2, playing my game and leaving a thoughtful review! You've gone above and beyond!

in second thought, i figure out the problem. i was playing the game sitting on my chair. but player is supposed to stand and physcially move arround

For those without VR, here's a playthrough video! It's kinda long because I was having too much fun.