The Legend of ProteyView game page

"No slime has ever won a fight against anything, EVER!" Until now.
Submitted by chalkdust — 18 hours, 15 minutes before the deadline
Add to collection 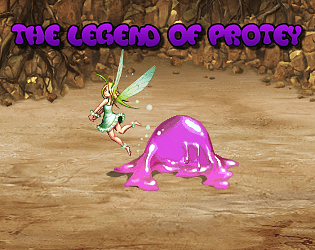 The Legend of Protey's itch.io page

So... how about those judges' comments, or anything to shed light on why this did not get the recognition I expected it to get? Is it just me or are there no judges' comments to be found here?

I also expected my vote to be among several, not among just 2!

Thanks man, I really wish I'd gotten more feedback. I got one judge's comments (fairly positive) in a personal message (she just missed the deadline to post them here) but I never got anything else from the others.

What a great game! What a fantastic take on the metamorphosis concept! I did have some difficult spots, but ultimately I could figure everything out on my own to the end. I was patient enough to accept the initially slow movement of the jelly form, but not everyone is like me in accepting some viewer responsibility. The following criticisms are all quite minor but just important enough to mention:

Is there anything that could be done about the perspective on those two hills with the flowers that butterflies use to jump? I kept missing the center of it because I would expect each time that I should be a square lower than was actually the case.

Between the zombie farm and pirate storylines there was a town where interaction with otherwise seemingly normal humans (were they zombies for some reason?) causes you to restart (and it was also good of you to be quite forgiving so as to not issue a game over in such scenarios). The way I first met the swindling captain (that was or was not the same as the figure near that exit from town?) seemed random and led me to wonder if I missed something in the town.

The bat cave would not have been so difficult had it not been for the strange exit, strange in that it did not seem to afford passage out at first, even in bat form, so only after avoiding it searching elsewhere did I try again and succeed.

That twist at the fortress where we must recall the locations of the curiously important-looking crystals was understandable (I cannot blame one for wanting to test our memory), though it was my least favourite part, probably due to the crisis music which got old fast, for me at least. That was a significant motivation for me to want to end that particular quest.

Otherwise, I am quite impressed with this entry! "Protey" is such a great name not only because of its meaning which is derived from Greek, but also because it is an anagram of "poetry". Was this intended?

Thank you for your review! And thanks for playing through! I hope you enjoyed the story ending!

Yes, the dialogue with the scarecrow tells you that the people in the town are possessed by ghosts. You are supposed to go to the southeast corner of town to the graveyard, but I mistakenly made the southwest exit to the beach open earlier than intended (already patched for the next update). If you take the wrong route, you miss a bit of story but it shouldn't be game-breaking. This is one area of the game that will benefit greatly from the Quest Journal I am currently adding.

Yes, there is some inconsistency in how to activate some interactables. This is mostly due to trying to design for both touchscreen and mouse/keyboard setups. Should I activate on touch or on action button? I haven't quite figured out what works best across all platforms, so I have work to do in this area.

Based on feedback, I am considering a total redesign of the mountain cave. It'll still be a maze, but I think it needs to be smaller, use some interactables, and have a more obvious indication of how to exit.

The meaning of Protey's name is intentional; the anagram is not. Nice catch, though! Wish I could claim credit for that.

Alright, so I want to start off saying this is not my kind of game... but I really enjoyed it.

Mapping is great and the use of intractables and character changes is a really unique system and fun and nostalgic game play. Critical path needs some work in some areas (I was just guessing where to go at times, but luckily the maps are small and tight) and the backtracking is a little annoying at times. A simple quest/mission system would really benefit the game. It was simple enough to follow but because this isn't my kind of game, I was only half paying attention and was like "what was I supposed to be looking for?" Also for the time limit of one hour for the game jam, ending the game after the earth fortress place would have made for a satisfying ending and wrapped up nicely. Instead I wound up in a town and then a beach and a really awesome looking pirate ship when I should have been in a graveyard. I get that a lot of the maps are mazes but the path of least resistance led me there first instead, so once again, a simple quest log would have been nice. Dialogue is short, sweet, and humorous. Game play is fairly simple (in a good way), music is definitely on point with the feel of the game, minimalist menu is nice. One gripe would be that after mutation, instead of automatically backing out of the window, let the player back out of the window in case they chose the wrong transformation. I got to the "boss" of the graveyard and got tired of trying to figure out the puzzle (this isn't really my style of game) and went to save and am way over the hour mark, so I stopped playing there. I will continue playing it later thought.

Would definitely recommend and would suggest trying to port to mobile as it would be a great time killer, brain teaser type game.

Thank you for the feedback. You've given me some good ideas for improvements!

A quest system is a great idea. I thought it would be unnecessary since the story is linear and you only have one quest at a time, but in retrospect there are a few areas where it could help keep track of things.

The beach is supposed to be blocked off by the Captain until you've completed the graveyard, but I double-checked and it appears that I made the Captain's walking range a bit larger than intended.

The graveyard puzzle is a simplified 3x3 lights out puzzle (missing the center light). Hit the blue light on the wall to reset. SPOILER: The simplest solution is to simply toggle each light once.

Please drop back in and let me know what you think of the rest of the game!

Also, I put puzzle solutions in the game's thread here. You'll probably want that for the final puzzle.

This was really cute! I found the humor to be on point - and my only major gripe was that the movement speed was so slow. Congratulations on your entry! :3

Thanks for the feedback! Yes, I felt very nervous about the choice, but early movement was slow by design specifically because the early maps are quite small and you gain a *lot* of speed later in the game. I wish there was more fine tuning available in the movement speeds so I could've made the difference less extreme.