Play as a cute penguin trying to get to the lazy hero.
Submitted by Ramil Hinshaw (@RamilHinshaw), Desiree Hinshaw (@DesireeHinshaw) — 50 minutes, 48 seconds before the deadline
Add to collection 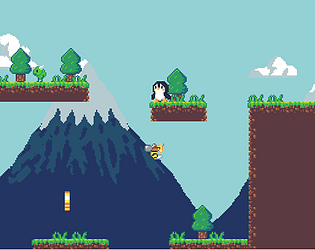 Fun story line. Cute graphics. Fun music fits the game. Good level design. Challenging but not impossible. It's clever that you start on the final level and go back to the beginning to find the hero. In general, the controls are a bit hard to get used to, and controlling the character feels a little stiff (if you want specifics, let me know and I can elaborate). Overall, you've got a fun game, and with some fine-tuning of the controls, it would be even more enjoyable!

Submitted
The Behemoth Beneath Us
LikeReply
Ramil HinshawDeveloper2 years ago

Thank you for the feedback, my team deserves the credit for all the assets despite not using all their stuff. I do agree the controls can take used to getting to. When you say stiffness are you talking about small amount of acceleration (like the Mario games). I can look into more when I have time and see what feels right. With that said thanks for playing our game! :D

Regarding stiffness, I just mean that it was sometimes hard to get precise horizontal movement in areas where it would be helpful, like when jumping up through the cloud platforms, I would jump and then tap the D-pad to the side just barely to land on a platform, but it would sometimes lurch me forward further than expected. Similarly, in the area where you go down through the spikes on the platform, I would just barely tap the D-pad, trying to move over just a tiny bit to avoid the spikes, but the character would often slide to the side much more than expected.

Ah I see thank you for the input! My music composer actually said something similar and why he had so much troubles on the cloud level. I'll definitely refine the controls more next week when I work on this some more. Grounded friction is actually programmed but it seems it needs to be tweaked (with other various options) to make it the platforming smoother. And apparently I was the only one on the team that could beat it so I need to make it easier also haha. But again thanks for the input !

Pipo seems a very likeable agent of the devil.

Very cute! I love Pipo's personality and the game controls well. I just wish there was an easier way to aim snowballs.