Made for ICT Game Jam 2020.
Submitted by Pyrobird — 16 minutes, 16 seconds before the deadline
Add to collection 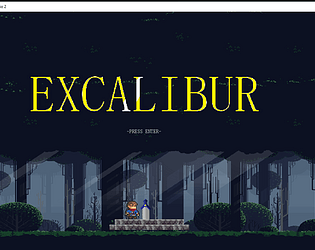 Nice! Finally beaten the game (or at least gotten past the dragon part where it stopped scrolling for me). Very fun idea that you really incorporated well. Adding more things to do aside from just slashing monsters and punishing the player for slashing the wrong things was a genius idea. Great Job!

How much of the artwork is yours? There appears to be a few different art styles in use. Overall a fun game, and just went I started thinking to myself “I wish there was a little more strategy.”, that’s when the game changed up from just slashing a few monsters to having to cut ropes (or not cut ropes) to help the hero get to the end. It’s an interesting take on the theme. You don’t get to control the hero, but you are still trying to help the hero win the game. Clever! At one point, I ran into a bug where the hero fell off a ledge when the dragon was chasing him, but the level kept progressing (moving to the right) and then I got stuck at the end of the level. Would be nice to see a bit more difficulty progression, such as allowing you to kill monsters early on with just one slash rather than 3. I understand this is one of the hurdles of the game having to kill the monsters quickly enough, I just feel like it shouldn’t take 3 slashes to kill a snake or baby slime :)

Submitted
The Behemoth Beneath Us
LikeReply
PyrobirdDeveloper317 days ago

Thanks for playing my game!
I made a couple of the sprites myself and changed the color of a few, but most of the art assets were found online. I wanted to focus on coding since I've never made my own original game before and I knew it would take a long time.  Another person mentioned the bug on the dragon level and the transition block is there, but it seems not to be working properly. I'll definitely make sure it's when I continue this project!

Honestly a really fun challenge! On the Dragon level though, the Hero fell through the world and didn't die, so I couldn't complete or restart the level.