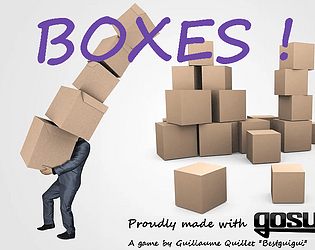 Ho what an original concept! Great job on this one, it is very original. I liked how you need to manage both taking out the box and at the same time place box according to their colors. A very challenging game to my poor reflex :)

This game is very challenging and a lot of fun! It's like trying to pat your head and rub your belly at the same time. ... while also clicking a mouse ... but only on the yellow boxes ... no wait, the blue ones!... Strangely, it's actually a lot easier on the faster speed. I loved the music and the beep sounds.

Thanks for a rendition of Box Sorting Simulator 2021. I really liked the background and movement of boxes (and conveyor stripes!). Sounds were really well picked. Also thanks for a detailed ingame help though noting there one needs to fill a sorting area with 10 boxes before any of its points are added to the main score would be helpful ‒ I got confused my final score is 0 even though I sorted some boxes (but not finished any 10-slice of them).

Mouse cursor was not showing for me but adding needs_cursor? method to the code solved it. I guess some of your settings outside of this game make it you have a default cursor even without needs_cursor? in game code.

I once managed to put a box on a stopped conveyor where that box did not start moving once the conveyor was activated again. As that clogged the loading area, that attempt was doomed. It seemed to me this happened when I managed to load box on conveyor just as I was billed 50 points for another box reaching the end of the conveyor. I was not able to reproduce the bug, though.

Is the speed of new boxes actually increasing? I played for several minutes once, reaching score of 10555. Chaos (beside the initial pile of boxes) seemed to be coming self-caused when I managed to misclick on a colour I was trying to process in given batch.

Thanks for the detailed feedback ! The mouse cursor was expected to show because I use the latest version of Gosu where this rule was changed... it may has been safer to include this line though on a gosu oriented jam where users could have previous versions ;)

I know that some box could be stuck on the entry point, I didn't have time to figure that out unfortunately.

Speed should have increase with time... maybe in the dropping boxes that could start to drop faster. I thought about that but ran out of time. Using the keys instead of fast mouse moving could have helped to deal with that.