Submitted by D3nX — 4 hours, 5 minutes before the deadline
Add to collection 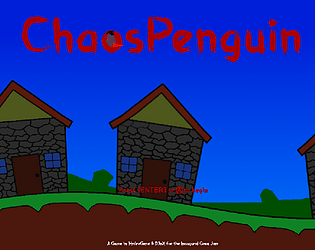 As mentioned by others, great job both on the parallax scenery and music. The foreground action doesn't seem too chaotic per se but the setting in the background shows what the scene is about. Great example of scaling with that vortex, nice touches with minimap and with the titular antihero in the game title.

I could not run the game due to missing load_lib even after obtaining opengl-bindings gem. In the end I just used Wine to run that .exe file...

In few cases where there is a guard near edge of gorge he often gets shown walking over the air as if he was still over ground. In such cases, I wonder, is it even possible to get over these guards without being hit just by jumping?

There is one last guard just as the cannon balls flies at you for the first time. I am not sure whether it was intended like so but I liked how this new surprising damage is counterbalanced by provided healing ability for one last time. Thinking about it now, those guards at the edge of gorges may have actually been placed there so there is high chance (if not certainty) player gets damaged during run so that they learn about healing possibilities.

I also liked the telegraphed attack of cannon. I am not sure whether the boss was attacking me after the cannon was killed or whether he was just upset. I surely got damaged a bit but that may have been just touch-damage. Were there supposed to be some projectiles from the boss? Or can one just destroy his tower calmly, as long as one keeps a safe distance?

I have managed to win after few runs.  The game didn't provide any extra info (enemies killed, time taken, score) in the end scene.

The music is awesome! The game feels very immersive with all the parallax layers and background animations. I especially like the silhouette layer with all the people running around, and the ground stomp, and the jumping sound, and the music! And did I mention how much I liked the music?

This music, I love it so much ! The game itself is really savage, the chaos theme is respected ! Graphics are simple but cute and some effects are really well done. I'm not really fan of the platformer part, but the beat em all is cool. Really cool to see the penguin again, too :)