A Jump & Run Games
Submitted by Khairul Hidayat — 11 days, 5 hours before the deadline
Add to collection 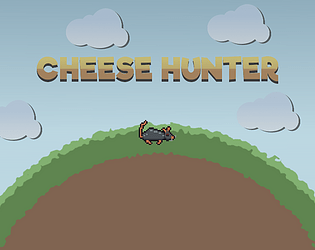 The use of the 3D to make a 2D plataformer is interesting.

The control is a bit hard because the movement of the mouse. In most case you "hit" with a cat that you didn't see. Anyway, the game has a ver good looking. It's a very interesting exercise.

The game looks really nice and you made very good use of the theme! It's kinda hard to control though. I think a variable run speed (maybe with mouse pos distance to the player) would be nice.

Like GameDL8 I also couldn't play it. The mouse runs to the left wall as soon as I click play and than I can't change the direction. Would like to play it! :(

I really like the look'n'feel of this game, the 3D corridor has a very nice effect, and the HUD is pretty nice too. The gameplay itself is kind of repetitive, it would be nice to have some more randomness, and also a time-based bonus, so that you have to find a trade-off between grabbing as much cheese as possible and rushing to the exit. It could be nice to be hunted down by angry kids or something :p

Also don't forget to update your GitHub repository. I had completely missed the fact that there was a version of the game with cats until I read jota0222's comment and tried to download the source zip archive.

I'm sorry but i can't play it, it keeps trying to move on the other direction

good game, only a problem: the mouse has no regulable speed and is difficult evade the cats.