Use electricity to fire back at ghosts. Part of the GMTK GameJam
Submitted by Alex (@AlexJDavos) — 12 hours, 54 minutes before the deadline
Add to collection 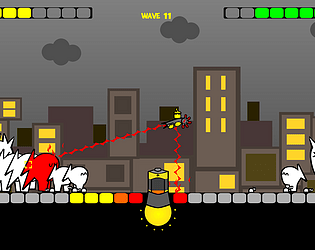 How does your submission match the theme?
BoltHead is a wave defence game where a central battery must be defended from attackers.

Dual purpose design is used in a number of ways:

Using a bolt of electricity, the player can jump up and hover. In addition to gaining height, the bolt charges the ground directly below.

Increasing the ground charge allows for a number of things, firstly the player can hover higher (allowing larger foes to be attacked from above), secondly enemies are slowed down, and thirdly it unlocks the zapper gun.

Both the zapper gun and downwards bolt can be used to either charge ground, or damage enemies. They can also be used interchangeably to gain more power when pointed at the central battery, however this risks depleting the battery entirely, losing the game.

Finally, resting on the ground restores both the player's power and the central battery's power. At full battery, health pickups are dispensed.

(If I were to make some changes I'd increase enemy move speed and the damage they do to the central battery, it's a little too easy at the moment)

All music and sound effects sourced from freesound.org

Your game is quite polished and your art style is amazing! The game itself is quite fun too, its like resource management with some action or tower defense involved. One suggestion would maybe to make the guns have a range so that I have extra incentive to move, because right now I can just charge one spot to get the levelled up gun and feel relatively safe and cope without the slow. Other than that, really great game and i hope more people review it :)

Thanks :) really appreciate the feedback. Yea, I feel like there are lots of good ideas but needs a lot of tweaking to make it more challenging like making enemies faster and hence a reason to move about to slow them down, or like you said limit the range. Glad you enjoyed it!