Pick fights in a bar and try to stand to the end.
Submitted by CreativaGS — 20 hours, 45 minutes before the deadline
Add to collection 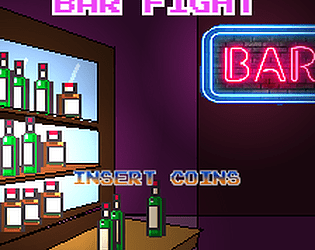 Would have loved to be able to scale the screen up.

I just punched everyone once and ran around the room in circles until the level was beat. Not sure if that's what I was suppose to do.

I think having different types of brawlers would have made the scene more chaotic and fun. Some simple ones that just follow you around. Some that charge you. Some that are just berserk going in random directions.

Art is nice and nostalgic .

Submitted
Bunnies are Out of Control
LikeReply
CreativaGSDeveloper2 years ago

Yes in fact is what you did. I planeed to add more brawlers with their own IA, even wanted to add policeman and guards, very hard to defeat them but time ran over me and didn't allow me to finish those new mechanics, it's a game i want to add new features later including scaling the graphics. Thank you for playing!

Lovely game !!! Loved the arcade/retro style it has, the presentation is on point and the sound design is great. Definitely enjoyed this one.  It could use a little more clarity and dynamism

It was hard to start (you had to read the description (-)

The screen was really small -

the game was pretty slow -

I liked the idea of starting the fight by letting them hit others but the ai wasnt that smart. it would've made more fun could they move faster.

Also you could've made it so that you had to dodge their fists so that only than they would accidently hit others instead of just standing behind them.

Thank you, i'm glad you have enjoyed it. I do agree this game could be better, there were a lot of features i planned and couldn't find the time to make them work. Perhaps i could update and polish it. I really like the idea of avoiding hits and accidentally hit others who will join the fight. It's not an excuse but trying to make something entirely new with a lot of mechanics and graphics is too much for a single person.

Again thank you for playing

I liked how the game was designed like the old coin game machines (forgot the name)
Arcade machines, you mean? In fact that screen size is just the one those machines used to have...

I couldn't play the game, it said " Insert Coin"

You just need to click on CREDITS on the bottom right corner.  Each click it's a coin.

Ok cool, now I played it. Love the art and the soundtrack. Easy game.