Do The Thing!View game page 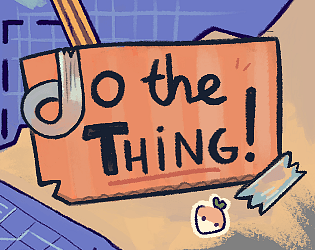 Do The Thing!'s itch.io page

How does your game fit the theme?
Join together parts to make mobilia and fit the criteria!

What a cute arcade game! I loved the personality and charm everything has and the interpretation of the theme :D

Love the style and presentation! Physics based gameplay is hella hard to tune and get right, especially in such a short amount of time. But the heart and personality is all there! Please bring this world and these characters in your next endeavor!

Thank you! The style & presentation is all our team joined together (pun intended) and I couldn't be more proud!

I like to challenge myself when it comes to coding the gameplay so the physics idea sounded great, we've never done physics before. I am still playing and fine-tuning it for a post-jam update and I am feeling more and more confident with physics in game maker, so I would definetely love to play it in the future! Again, thank you for playing!

LikeReply
Whales And GamesSubmitted171 days ago

As expected from Jaime, Lune and all of the other folks, this is a fantastic game jam entry with a a lot of personality and originality!

Once again, it's overflowing with character, artistic charm a unique approach to art. Just as promised on Twitter, the soundtrack was very surprising, especially going into the credits and there being lyrics all of a sudden. Presentation and audio-wise, even with some small issues here and there (such as it being hard to really understand where the physical ground is), is where this game really excels at!

However, gameplay wise I can't lie I had a bit of a hard time getting through. 🙇 I really liked it, and I think there were tons of genuinely fun ideas and a Warioware-esque vibe to it, but as noted by other comments, there's certainly issues and bugs that present it from being a mindless fun time. While the base goals of each minigame (like stacking the books or keeping the table horizontal) seem to work, the scoring, times and stretch goals were a bit of a hard-grasp, sometimes showing a ❌ even as the conditions for them were checked. There was one time where Ailmo was inside the OK circle, yet it still counted as a fail.

The first time I played the game, I was even genuinely confused because - I'd assume because of a crash - I got booted out of the game and wasn't sure if it was part of the game or a bug. I was unsure of how to get more time, though I did understand when you failed a job, you wouldn't get any. I also found it pretty weird on how the game counted the time down even as you were still reading the job description and mentally processing what you had to do. Finally, but not least, there were times I successfully went through minigames, got score, only for the game-over to read Level: 0 & Score: 0.

There was a surprising amount of polish in some aspects of the game, like being able to pick shaders, the credits with the togglable physics and even the overall presentation of the menu! But the overall core of the game could have definitely used some of that same polish. I hope that you folks give it another shot or get some time after the jam to give it the tweaks it very much needs because I can definitely see the fun potential of this game. Here's the best of luck to that! Cheers! 🐳

Yeah, lack of polish & annoying bugs. The Slide Task is literally impossible to complete due to a last minute change, a crash is not a feature of the game. It's the game jam life! I am very proud of the team for being able to put everything together, I am just slightly mad at myself for not getting the levels right in time.

But that's what post-jam updates are for! Right?

Thanks for playing! Nice looking charoucha you built there

Thank you for playing! We all are! haha

Maximum originality, maximum points for presentation! This is definitely the foundation of a very cool game idea. I personally don't think it's any fun yet, the problems with the gameplay are still too large, like I never seemed to get a set of items to work with that would allow me to complete the task, and the time limit is just unnecessarily punishing.

But even so, this is the kind of idea that I think shows so much potential that it could win on those merits even with its implementation problems.  Fine work!

Thank you! That's fair, the main game definetely needs a lot of polish and we'll be following up with a post-jam update.

Interesting gameplay! I had a good laugh at some of the names it came up with for my creations! Some of the level timing seemed unbalanced though, for example: I would get to the second task and before I could finish dragging things into play the timer would already be over on the second task. Great job and idea otherwise!

Thank you for playing! The naming thing for your mobilia has got to be the best thing i have ever implemented in my life haha

We had little time to balance things out , it does not help that sometimes the timer bugs out and keeps running when it shouldn't, making the player lose even more valuable time :T We'll definetely be making a post-jam update!