Find your way out... before you run out of light.
Submitted by jiaweikhong, cyclops48, brendals, debrisbits, esverion — 16 minutes, 17 seconds before the deadline
Add to collection 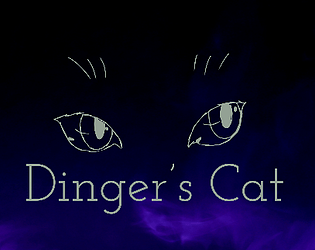 How does your game fit the theme?
The game features the lack of control over the player's vision and time. The player controls Meowda, a cat who must escape before her vision dims to nothing.

Fun little game. Loved the setting and how you managed to make it feel really tense. Good job!

Thank you! Glad to see that we could bring the tense feeling across!

I really liked the idea and the atmosphere. The game looked super good too, clearly a lot of effort has gone into it. I also enjoyed playing it, at least initially. I do feel it needs some tweaking; wandering around got kind of boring after a while. It made sense within the context of the game to have everything look the same, but it became very monotonous, and the long winding halls that went in loops were fun to explore at first but were frustrating after a while. I never finished the game because I couldn't figure out how to get past the two Dingers near the two boxes; obviously I missed a switch somewhere to open the door but after five minutes of going in endless loops with no hints or remaining dialogue I wasn't really bothered to finish. Having more people hanging around with a slightly lower chase speed and tweaked level design will make this a very suspenseful and fun game. As it is, fantastic for a 48 hour game jam!

Submitted
You're Out Of Control?!
LikeReply
jiaweikhongDeveloper2 years ago

Thank you for the feedback! Our team agrees that a bit more guidance should be given for that room. The switch is in fact found in the path behind where the second Dinger is standing in that room.

Great game, nice art, can't  believe they did it in 48 hours! Mr Dinger was really annoying.

Thanks! Yeah, I wonder why he is so obsessed with Meowda...

Cute game with a good presentation! I did find the "move-back-to-box" near the "It's a dead end" a bit too long, but it certainly did convey a feeling of powerlessness! Thankfully, I did have plenty of fish.

Submitted
The things we do for Love
LikeReply
jiaweikhongDeveloper2 years ago

Thank you! Great to hear that you completed it, well done!

Nice Game! If I were to update it I would change up a few walls to different designs and colours. Currently the rooms look a bit stale and it's easy to get lost.

Thank you! That sounds like a great and simple way to spruce it up!