You can jump with Space.
Submitted by Philipp Mayr — 1 hour, 32 minutes before the deadline
Add to collection 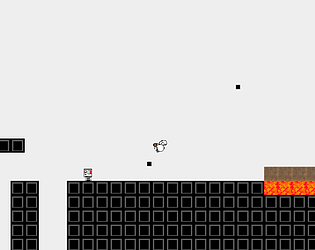 Nice entry for the jam! The overall concept is quite neat, but I think the execution could be improved a bit. FWIW, I don't think I had any input lag.

So, the jump physics are definitely weird, but I could see them being a feature rather than an issue. E.g. if bouncy boy didn't have a spring as his feet but a propeller, the physics would seem fairly natural (the propeller just barely overcomes gravity and lifts you up a bit before you crash down again). It definitely makes for a unique experience.

My main grudge is the lack of checkpoints combined with a weird difficulty curve. The hardest part of the game seems to be the initial black on white section. Once you get to the earth and grass tones, the game seemed fairly trivial until getting to the boss. But then you die to the boss and have to do it all again. Maybe breaking up the game into multiple shorter levels might help, and also letting the player get used to the mechanics with an initial safe section without abysses (so the only way to die is getting stuck or then later running into an enemy).

What I do really like is the mechanic of getting stuck in the autoscroller. It gives you a finite amount of mistakes you can make until you hit the left edge of the screen. Maybe this could be explored further by having some sort of power up that stops the screen scroll for half a second, so you can catch up a bit... and if you're doing really well, you'd want to avoid that power up, because the further right you are the less warning you get for upcoming obstacles.

As Mark would say, lots of potench here. :)

Thanks for your input. We actually planned on integrating some of the stuff you said, but didn't have time. If we develop this further we will implement some of these for sure. The redesign with a propeller is a great idea, we haven't thought about that. We are definitely implementing that redesign if we move forward.

Thanks again for your Post. I hope we can use our potench. :)

I really loved the music, but sadly the physics were a bit off to me. It was odd how you jump up slowly, then crash down very fast. It also grounded me at several points for seemingly no reason while I was jumping. While it is fun, It would be much less frustrating with a better jump arch.

Thanks for your Input. I agree, the jump physics aren't very good. We are not the best physics Programmers. But maybe we will push out an update when if we decide to work on it a bit more after the jam fully ends.

I liked the concept and the aesthetic (especially the music). However I was not able to get very far because, at least on my computer, there was a lot of lag between the input and the player movement. This could just be a side effect of playing a Windows executable in Linux.

I feel like if I did not have the input lag issue, the game would be just as addicting as the dinosaur game in Chrome.

Thank you for your Input. The input lag is not normal, but our game isn't very optimized, sooooo… We decided not to use an engine, which of course comes with the problem off lack off optimization in 48 hours. And thank you for the Chrome comparison, that's pretty great :)