One bomb, one minute, lots of buildings to wreck
Submitted by ThanksG — 3 hours, 13 minutes before the deadline
Add to collection 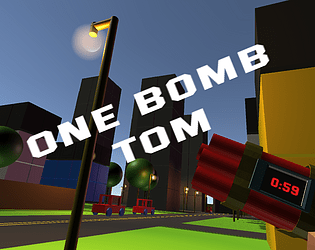 The dev mentioned elsewhere they were mostly focusing on just completing a project rather than making something truly groundbreaking, and I can respect that; that's essentially exactly what we did last year!

For what it is, you made a fun little distraction game. You leveraged unity's physics system to good effect and made it fun to spread a little mayhem. If you're looking for things to improve for next time, Unity can handle a lot more rigidbodies than that, so don't be afraid to make the buildings out of smaller cubes; it could prove more satisfying to explode! I also had an issue with fullscreening the game forcing it into some weird aspect ratios. It almost seemed intentional at first, but the more I played with it the more I realized it probably wasn't.

On balance though? I had fun with it! I hope to see more of your work in the future.

but seriously though, on my second run, the collateral of one building somehow destroyed the rest of the town... truly a one bomb experience

Reminds me of my hometown, the music took me back to my wedding day where I also wished I had more than 1 bomb.

Interesting game, a very good try, but falls a bit short on the delivery side. 2/5 yorkshire puddings, keep it up and you'll get there!

Apologies for making a game about destroying your hometown/wedding

Thank you for playing and providing feedback! Could elaborate on what was lacking on the delivery side?

Honestly we didn't expect to make anything close to "good" this jam  We're just happy to have a finished, playable game :)

Really beautifull city. I only get stuck in some buildings. but still it's a great and refreshing game.

Thank you! The player collision detection is pretty wonky, but it's something to improve next time!