In this little platformer without vision you control a little monk with a wiggly lamp.
Submitted by PizzaTonno — 8 minutes, 39 seconds before the deadline
Add to collection 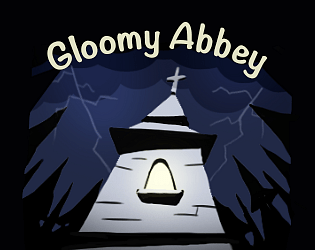 The aesthetics on this are pretty excellent. I like the apparent story of a pervy monk trying to sneak a peak and being thwarted by shower curtains every time. It's kinda like classic Mario but with a pervy monk instead.

The concept is really awesome, and I think there's a lot that can be done with the risk/reward relationship introduced by the swinging lamp being influenced by your speed. It isn't really explored much here, but there's definite potential there. As Syllabus mentioned, there's not really enough time to slow down. Also, there's really not enough to this game mechanically or level design wise to really explore the core idea.

If the levels included a couple of paths and maybe a collectible, that could go a long way towards making the player choose between blitzing through the level and being able to watch their step. It would also reward players who get to know the level well enough to navigate it without seeing it.

Thanks for the detailed critique SplitHare! I think in the next couple of months we will balance the physics of the lamp and the speed of the candle. It was our first Jam and even if the game is not nearly close to be finished, we had a lot of fun creating it. These are some good points you're mentioning, especially the last one, we will definitely keep them in mind. Thank you for playing!

That was an interesting idea. Certainly very atmospheric, and the art is really nice. The swinging lamp is a nice mechanic, but the time limit stopped me from taking the time to maneuver the lamp to viewing the ground in front of me. Instead, I kind of just ran for it after the first couple deaths in the last room. I think you could make better use of this core mechanic if the player felt less rushed and the levels were somewhat randomly generated so I can't just memorize them (I know randomization is beyond what's possible in a 48 hour jam).

The stairs were a little annoying, but the rest of the game played pretty well. Overall, this was an interesting game. Thanks for making it!

Thanks SyllabusGames for your feedback. These are very helpfull points, which we will improve.

At the end of the Jam, we were in a bit hurry. So we couldn't put much love in the leveldesign. The same issue with the candle-timer, which we will adjust to the levels soon.