A text-based adventure without a "look" command.
Submitted by gamma_delta — 15 hours, 25 minutes before the deadline
Add to collection 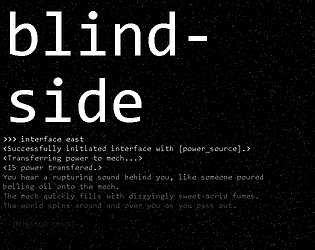 This is a really cool concept, it definitely makes you a bit disorientated and leaves you feeling like you really are having to carefully explore. Unfortunately it took me 3 attempts to actually play the game. I was trying to scan around, or check my power level and was met with 'invalid command.' I only got somewhere when looking at the pictures with the game that let me know 'interface x' was a command.

I have just realised (while writing this) that you can look in the txt.files document and read stuff, including a very good and clear explanation of the commands. If this had been more clear I would have found it more enjoyable. I am going to play again with this in mind. (Please add the fact that you can get info in the txt files to the readme)

Ok, so, now that I have played the game the way it was intended instead of bumbling about like an idiot... It's a good game. I made it out alive (got the radio and the password). It's not very long, but the fact that the room changes each time gives it some replayability. I enjoyed it once I was able to get into it, and the story was interesting. I think it needs a bigger hit that the man file contains the actual commands (although this might have just been me being stupid) and I think it needs a small space between the edge of the screen and the text, it would make it easier to read. Otherwise an enjoyable game

I tried this game for half an hour. The premise, as I understood it, was to make a text game with no "look" command. Which is actually a pretty clever idea. I had never realized how crucial scenery descriptions were for this kind of game.

The writing at least intrigued me enough to try to progress. The first four or five playthroughs I found the door and then immediately died. At first I thought I was going crazy because the door was moving, but then I realized that the room was randomly laid out each time. So my attempts to map it were foiled. This is actually also a kind of interesting idea because it forces you to actally explore on each attempt rather than just plug in the same commands each time.

The problem is when this is combined with the power mechanic. I could usually find ether the radio code or the radio before I froze to death, but never both. Once I got the hang of the game it was basically pure luck on whether I found all the pieces with enough power to combine them.

One of these mechanics needs to go, but I give the dev credit for trying to combine lots of things in the game. Better to have too much than too little. I want to give credit because I found it oddly compelling and immersive to bump around in the dark.

Honestly if this game had sound to give some atmosphere and maybe some environmental clues I think it could be a legitimately fascinating text game.

Thanks a lot! I didn't have time to playtest this, so I might have caught the power thing if i had more time.

By the way, there is a power source in the hangar somewhere. You can interface with it to get some more power. (Just don't overload your batteries...)