[GPJ1] You're running out of time! Defend yourself against the arm-wigglers!
Submitted by Steel_Abraxas — 2 hours, 9 minutes before the deadline
Add to collection 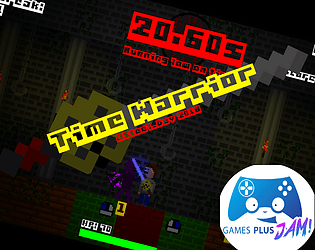 Give a brief description of your game:
(there has been 4 builds because i've made changes to the leaderboard system, no gameplay changes, though!)
In Time Warrior you play as a time lord of time lordness who has the magical Time Blade as his main weapon, you somehow got stuck inside a dungeon of sorts, and must defend yourself against wiggly arm dudes.
Get to the top of the leaderboards, survive for as long as you can! With increasing difficulty depending on your kill streak, what's the highest score you can get?

How did you bring the theme of Time into your entry?
I brought the theme in by making the entire thing time based, you're running out of time and the only way to gain more time to survive longer is to kill.. but the more kills you get, the less time gets added, and the more difficult the game becomes >:D

What was the most interesting part about making the game?
The difficulty increase as you're playing and getting kills. Higher kill streak = Faster enemy spawning, faster enemy movement, less time added per kill, and more score multiplier added.

Anything else to add?
The difficulty may be a bit much, but that's the point of the game really :D I did want to add a difficulty selection system and multiple game modes, but its just a jam game and I didn't have much time D: But i had loads of fun developing this, and i hope you have fun playing it!

Nice little game! I included it in my Games Plus Jam compilation video series, if you’d like to check it out. :)

Hi i like the game very much but i have one little thing to say. that is that when playing this on a macbook with a trackpad you have to press with one finger then press with 2 fingers which can be complicated and would like to know if it could use button as well. my high score is 38,000.

No sorry i set it up for just left & right click D: Thanks for playing though! I sadly can't release a patch right now to add different buttons to press, i hope you understand :)

Simple & fun game. But not too much on the gameplay.

Thanks! Glad you enjoyed it :D

Third in the leaderboards on my second attempt :D

The gameplay is really fun and addictive. The only thing I'd suggest is that you can attack in both directions if you change direction mid-animation (if that makes sense?) - that makes the game a lot easier and probably wasn't intended that way. I think that messes up the 'miss' detector as well as I was missing enemies but not losing my streak.

I also ran out of time on my first run despite not getting hit once, so maybe some minor gameplay tuning needed, but obviously in a jam game you expect that kind of thing.

I really enjoyed how hectic this game is to play. Very well done. One issue I had is the screen is a bit too dark for me, but my eyes suck so I wont hold that against you.

I'll keep the darkness in mind for the next Jam! I really love making my games dark haha. I needa calm it down with that! Thanks for playing and I'm so glad you enjoyed!

One of the biggest things I really like about this game is the simple fast paced arcade style of gameplay, my only problem is that I could never get past 30k points but that could of been me just sucking at the game lol :D Overall great job man!

Thanks! So glad you enjoyed it! Also sorry if you had issues downloading it, I was uploading new builds that had fixes to the leaderboards :P