A tiny game jam submission focusing on time disruptions!
Submitted by fullmetalashley — 13 hours, 35 minutes before the deadline
Add to collection 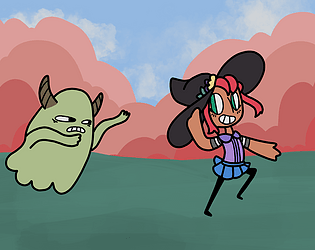 Give a brief description of your game:
A young witch practices time magic and accidentally brings time disruptions into her city! She has to make her way through time pockets where time moves quickly or slowly, and has to pass enemies who want to eat time on the way to fix the mistake.

What controls do you need to use?
WASD/Directional arrows, Q and E keys, 1 and 2 keys (Alpha keyboard, not num pad), mouse

How did you bring the theme of Time into your entry?
I incorporated it into the narrative by having it be the main mistake the protagonist made, and I worked it into gameplay by having a level where time would move faster or slower in specific areas. I wanted to extend this idea into more levels, but I just didn't have enough time (cue eyeroll).

What was the most interesting part about making the game?
The most interesting part to me was cutting the fat. I had so many ideas about the dream version of this game, but when I realized I couldn't do it all by myself in three days (art, coding, and design is a lot for one person), I had to cut out as much as I could while leaving the core ideas in place. Prioritizing and deciding what absolutely couldn't go was hard, but really insightful; it helped me see where I need to improve as a designer, which was humbling!

Anything else to add?
I had a blast with this, even if it was frustrating. It's my first game jam submission, and my first fuller project outside of my game design program, so it was really exciting to work on it.

Cute graphics! I included it in my Games Plus Jam compilation video series, if you’d like to check it out. :)

First of all, a huge congratulations to you for your first ever game jam project. I loved the combo of witchiness and girly flair in the character, not to leave out your wonderful graphic designing skills. The scene was soothingly colorful. The characters were well-animated.  The only thing that bothered was the jumping and shooting. But well, it's your first jam & considering the amount of time you've put in graphics, I'll give you a pass on the mechanics.

All in all, really well-done. Keep it up. You're gonna do awesome in your next jam!

It's SO nice to see a game jam entry that holds emphasis on character, visual design, and storytelling. It's a beautiful breath of fresh air amidst the other entries, which emphasize mechanics. From what I've seen so far, I can safely say you've got the Graphics category squarely won.

However, (as I'm sure you're aware) the game suffers in the technical department. The biggest problem is the collision detection, which is something everybody struggles with first starting out. I'm sure you can find a good tutorial on how to make smooth collisions, and I implore you to do so. Additionally, I felt the camera was too close-up; I couldn't see where I was going or where the enemies were until they were too close.

Then again, maybe instead of focusing on platforming, you might want to explore other game genres that play to your creative strengths and interests (visuals, characters, storytelling). A Point-and-Click Adventure game seems something right up your alley, as they tend to be quirky, character-driven, narrative-focused games with little emphasis on technicalities. RPGs, Top-Down Adventures, and Visual Novels are also some genres you might want to look into.

Thank you so much!!  I did not make the music actually, I got it from the Unity store.  I listed the artist in the description of the game, so definitely go check them out if you like it--it's a really solid pack and I love using the tracks!

Hey Ashley, I will leave some feedback here if you don't mind!

Just finished playing it. I would say you did pretty well considering the time limit and the amount of stuff you had to do (and being your first jam as well)! Also, really liked the graphics and story of the game (I think most will agree that theese are your game strong points).

Gameplay wise, it's simple and fun: I understand what you said about the dream version of the game versus the end result (on my first jam I had the same problem, haha), and going into a more simple gameplay sure helped make the game better. However, in my opinion there's just some small problems:

Just saying again, theese are just my opinions. Either way, definetly a fine game for 72hrs!

Thanks so much for the feedback!  It means a lot that you like the graphics and the story; I put a lot of heart into it there, and while I ultimately regret not focusing on the gameplay first, I'm happy with how everything else came out.

I absolutely agree with both of the problems you mentioned.  The platforming issues were a problem for me throughout, and I've definitely got to keep working on cleaning them up more.  I eventually got them to be functional (the state the game was in when I uploaded it), but to make things more functional and fun, they need to be smoother.  I actually did have time coloration planned for the entire screen when a time zone was entered, but I couldn't get it to work well with my trigger set up.  In my quick tests, the player would cross one of the barriers and that color would lay over the entire screen at a very low opacity, so you could tell what kind of time you were in.  Ultimately it didn't make it in for this deadline, but it's something I really want to work on, or at the very least update so it's more clear to the player.

Thank you so much for taking the time to play it and to leave feedback, it really means a lot!  I was pretty intimidated when I saw the rest of the games that got submitted, so it's really cool to get to hear what you thought. :D

Unfortunately I cannot play this game without installing Unity. It throws an error saying it is missing the UnityPlayer.dll file.

Thanks for letting me know!!  Apparently with the new Unity, the UnityPlayer.dll has to be included in the download to play it.  I haven't exported a build since I updated to this latest version, so that was a fun surprise.  It's all fixed now; I added the UnityPlayer to the zip, so it should work just fine!

Excellent so I just finished. The art style is very cute and I quite enjoyed the scenery. I do think collisions and the controls need a bit of fine tuning because it is easy to get stuck when jumping and about half the time I had to hold down 1 for the fireball to travel some time instead of just instantly exploding. Other than that very nice job.

I'm glad you like the art!  I definitely agree on the controls; I really want to work on refining it so it feels more like a platform, but I was having a tricky time polishing up the jump as I started to run out of time.  It's definitely the top thing on my redo list while I keep working on this game.

It's interesting to hear that the fireball didn't always travel for you; that's not a bug I noticed when I was playing, so it's good to know that it happened!  I'll definitely look into it and make sure to get that smoothed out.

Thank you for playing it, and for the feedback!  I really appreciate it.  I want to keep cleaning this up and messing around in it, so it's good to hear what you thought!