Submitted by LemonyFresh (@LemonyFresh_dev) — 33 minutes, 47 seconds before the deadline
Add to collection 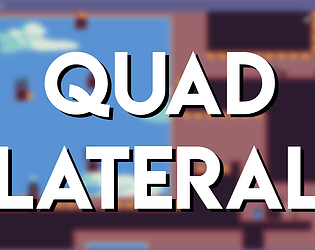 This is a hard game! Absolutely unforgiving from the controls to the collision boxes. The slightest touch on a spike immediately destroys the player character. Thankfully, respawning is well implemented and after getting the hang of it, becomes very satisfying to finally pull though another set of spikes. A quick look at the code showed that the physics are frame-rate dependent, which basically made it super fast on my PC. You might consider using frame-rate independent physics to ensure that everyone's experiences are roughly the same regardless of the computer power they're using.

The choice of using the up button to jump is questionable albeit fair. I would prefer using the space bar but then again... That's just me.

I did notice that you implemented coyote time and  wall grab time but again, way too fast for me to use efficiently. Some of the jumps were just flat out impossible without a lot of practice. I get the use of a button for wall grabbing but it felt like it was on the way rather than supporting the game. Perhaps grabbing the wall automatically would help.

Very nice music and good SFX! The soundscape fitted the game perfectly and complemented it.

Great touch with the stretching and squashing animations. That's some good polishing there.

Thanks for playing! You're absolutely right, it was definitely an oversight on my part making the movement frame rate dependant. Thanks for pointing that out!

This is easily one of the best precision platformers I've played that has come out of a game jam! Most end up being unintentionally precision platformers due to lack of good player control or lack of features like coyote time and the difficulty curve is usually all over the place. This game starts hard and gets harder unapologetically, which fits this type of game well.

There are a few nitpicks I have and I think that the player controller could use a bit of fine tuning to make it feel a bit more smooth, but overall it's a great execution. I think that you easily have the skillset to expand upon the game into something really good, although if you do so I'd highly recommend finding a few core mechanics or supplementary mechanics to make the game stand out.

When I first started playing I thought that the difficulty spike was a bit large, however in retrospect I think it's actually pretty good where it is. I doubt it'd hurt to add one more stage before the first level that is a bit easier, with the side benefit of showing that there are checkpoints, which I didn't realize until dying on the second stage.

One recommendation I would make, since all the levels are sort of separated out, is to make the camera 'lock' to the levels and only move when moving through the level transitions. It's a small grievance, but the moving camera can make lining jumps up a bit more difficult than they already are.

Another thing I would say is to eliminate the need for the player to hold down shift to grab onto walls. This could be done by making the player constantly grab walls or instead to add a button to do the inverse of grab (e.g. hold down, s, or shift to slide on walls instead of grab). To play the game you pretty much end up holding down shift the entire time, and so far I haven't found a time that it was preferable or needed to slide rather than grab.

Finally, the main recommendation I'd have for the game is finding some more mechanics to add, especially if you plan on expanding this concept. There are so many precision platformers now so finding something different about yours to stand out is what will make or break the game, I'd imagine.

In summary, great jam game and I hope to see you create a something more with your skillset!

Thanks for playing! I do agree that the controls could have used some more tuning. I'll definitely take your ideas into account should I ever make a game like this again!