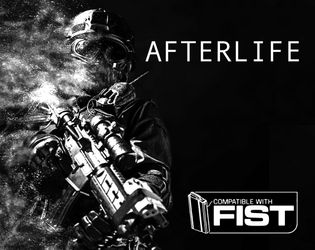 I’m a sucker for weaponizing anything that isn’t already a weapon. Afterlife weaponizes ghosts!

The adventure opens with content warnings and safety tools, always appreciated. (Bonus points for explaining the Lines and Veils process.)

Before we get to the adventure, a couple nice surprises: There are three new supernatural Traits: Phase, Invisible, and Possessed, which allows you to temporarily surrender control in a sort of Devil’s Bargain. (Roll a d6 to determine who you attack!) The new Roles are even better, but I’m admittedly a sucker for them and always want more. Spirit Hunter, Haunted, and Returned all make for fine character concepts. It’s almost a built in group concept right there.

Afterlife takes place on a CYCLOPS sea platform off the coast of Norway. FIST ops are sent in to investigate, and quickly run across resistance. The scenario itself feels almost like a dungeon crawl sans map, complete with random encounter tables.

If I had one request it’d be for a bit more roleplaying opportunities. This is obviously an action horror scenario, but a quick mention of interrogating scientists makes me wish for one or two colorful mad science types, perhaps named characters with conflicting agendas. I did notice one typo – “determine the sites purpose” – but otherwise the text seems solid.

The adventure has a nice, clean design, very easy to read, with a large font and single offset column of text. It almost reminds me of an old videogame manual, so instant nostalgia points right there.

Afterlife reads like a cross between the opening of The Expendables (2010) and Ghost Ship (2002). If you’re looking for a lot of action and a creepy, sterile atmosphere crackling with the supernatural, you came to the right place.

E5Burrito hit it on the head: This is a very solid, action-oriented mission that's going to keep players busy dealing with one encounter after another, leading to a tough final boss fight. I really like the new Traits, which are well-connected to the scenario and would make for a fun level up for players coming out of this adventure -- especially if they've messed with the wrong tech in one of the rooms or were exposed to a special item. And random event tables are a huge boon to a ref. Well done!

Minor editing note, for the first STAGE BOSS: "As the helicopter leaves the platform a previously invisible figure is revealed on the helipad."

And for the last part of the EPILOGUE: "As the team leaves, a pulse of green energy blasts out of the sea platform before it implodes into a wreck of twisted metal and fire."

I took off a star for having an enemy capable of a 3D6 area affecting attack. That's a not unlikely instant TPK. Otherwise excellent.

Thank you for checking out our entry and for the feedback.

I based the final boss and their 3D6 on the 'enormous monstrosities' from the core rule book but I think your right that the AoE element of the attack makes that very OP.

I've just pushed an update to reduce this down to 1d6+1 to all players.