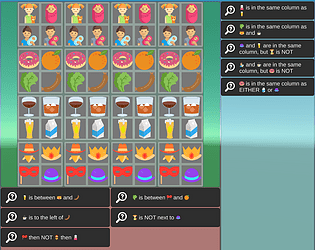 Let people know how long has this project been going, or share a bit of its history.
Been working on this puzzle generation system for a few months now. It still needs a little work, but I thought now was a good time to get it into a playable form. Enjoy!

I've added updated the description on the game's page outlining the basic rules of the puzzle:

p.s. if Orange is NOT in the same column as Baby, then you *must* know where Orange is to eliminate baby, and vice versa...

Didn't hear audio, but maby thats a browser issue. Graphics were crisp, controls seemed responsive. Really couldnt figure out how to play.  Tried 3 times on easiest difficulty. I though i understood what to do (click to eliminate pics based on clues, but even though i thought i was correctly eliminating something i still failed so not sure).

I've added a comment above explaining the rules a bit more clearly (and updated the page description). Hopefully that should clear things up!

I feel like DragonGino : the clues are not clear to understand (or is it the mechanic ?), sometimes we think a clue apply and in fact not. It is very possible we don't understand the mechanic :)

Also,, why is there clues at the bottom and on the right of the board ? Have they a different meaning ?

I've added a comment above giving a more thorough explanation of the rules - I should have included this from the start, so it's no wonder everyone is a bit confused by it. Hopefully it's a bit easier to understand now :)

It is a little bit confusion in the search element. it said sometimes that i have to delete that icon but i get the wrong one even if the descriptions apply on it. Also there is a bug when do it wrong and you go back to the main menu to try again it say then to you puzzle solved. further more I like the idea of this for a puzzle game

Thanks for playing! I've uploaded a fix now that will prevent the "puzzle solved" popup showing repeatedly.

I'm pretty sure the clues are accurate - but perhaps their description is confusing... let me know if you play again and see a specific clue that didn't make sense.