Blast asteroids, battle aliens, and save the planet.
Submitted by Bucksoft91 — 9 days, 20 hours before the deadline
Add to collection 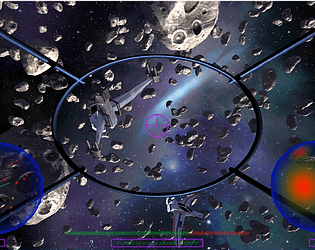 Let people know how long has this project been going, or share a bit of its history.
I started this project about 2 months ago. It's my first serious effort in Unity.
I wrote this as a portfolio project. It makes use of Entity Component System (pure) and custom data driven shaders, as well as some custom modeling using 3d Coat. I need more levels. Thanks for playing! Let me know what you think.

Just a heads up that this doesn't work on Mac

I'm sorry.  I have no idea what they mean in Unity when they say build platform. Windows/Mac/Linux.  I only have windows so I couldn't tell.

Cool prototype, I was surprised how well it ran considering how many asteroids were around.  The effects and textures look nice, and the sound design was pretty good too like the asteroid explosion sound was very satisfying.  The ship has very precise and responsive controls.  Trying to track down the smallest asteroids was difficult though when they go flying, sometimes I couldn't catch up or lose them among the other asteroids.  Also the enemy ships were realllllllly fast/small/maneuverable, and were similar colors to the asteroids .  I think I only killed 2 because they flew into my line of fire.  Maybe some form of lock-on based seeking missiles would help there.  Definitely a solid proof of concept though!