At Peace With PeasantsView game page

Quest
Submitted by BJNick — 2 minutes, 37 seconds before the deadline
Add to collection 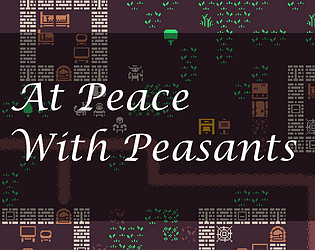 At Peace With Peasants's itch.io page

Theme
In this game, your tough task as a wealthy lord is to connect with the peasants.

Extra Monochromatic: All the sprites are using one bit, either on or off on a solid color background.
Extra Kuleshov Effect: NPC's express emotions through dialogue, but their surroundings also help to relate to them.

I agree with what the other commenters have said so far (and also got 10/12, despite not finding the cobweb quest). However, I did see two things that could've been better: 1. the game lagged for a couple seconds when I tried talking to a guard on the way to see the king which was just long enough to make the window temporarily unresponsive, and 2. the overall task seemed a bit too nebulous. I went to the king after doing a bunch of tasks to see what he would say and he told me to do more things. Then I did one thing and the king was willing to accept that I was done, but still hesitant. I'm not sure what made the difference.

Also, does it make any difference when talking to the peasants whether or not you're wearing your gear?

I like the aesthetic! The story was interesting. The field layout was well done, I completely fell for it.

Thanks for your comment! I'm glad the layout worked out as planned ^^