My kitchen is my sanctuary..
Submitted by ian michael waddell — 3 days, 12 hours before the deadline
Add to collection 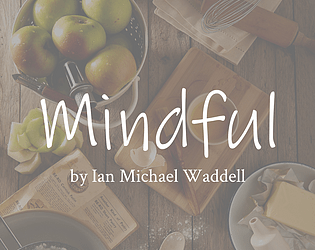 Which category is your game in?

Which theme does your game fall under?

After playing this and the Pumpkin Pie game I had to double check that this competition didn't have a cookery category! I enjoyed the mechanic of gradually building a page of cookery blog, but there was a bit too much to read before you get to the punchline.

Does a great job mimicking the style and cadence of a cheerful recipe blog. I'll admit I skim a lot of the memoir-y preambles in recipe blogs (just give me the ingredients list!), so I did skim some of it here as well. That might especially go for the secret ingredient page (I found it w/o hints, go me), which was very effective but could also trim some fat, since that's the one that needs to land. But that's maybe Le Grand Guignol nit-picking!

Playing this in Firefox, and the images were getting vertically squashed fyi. Fine in Chrome.

oops, thanks for letting me know re: firefox! (and thanks for the review!)

Seems like many others I missed the link on the last page on the first run though as I was kind of skimming the recipe section a bit waiting for the horror portion to start and was caught unawares of what I'd missed. I looked again and read it a bit more thoroughly the second time and found the link. Indiana Jones flashback ensued.

I liked that it was different, the spooky element was hidden and then came on strong in the end. I wish there was more foreshadowing though. I had a few issues with this game. The first is that the beginning was boring, I get the idea of having it seem like a real cooking blog, but something that was a bit off would have helped. Second was the walls of text, both the blog and recipe were so long without having anything exciting that I almost abandoned the game before I found the spooky twist--for real the recipe was so long I skimmed it and someone else had to point out the "human heart" in the ingredients, then I skimmed for how to prepare a human heart.

I also think that it would have benefited from having multiple short recipes ans a shorter blog, then the recipe can change based on what you selected for your blog.  That would make the game more interesting. I like the concept, but as it is right now, I think it starts off too boring to entice a reader to keep going.

Really tugs at your heart strings. Especially at the end.

I'm not sure if fun is entirely the right word, considering? ;)   But I enjoyed this! Clever and subtle. (I almost missed the "here" link on the very last page, though, so a clearer link format on that might not hurt.)

I agree, I missed the "click here" link on my first play though. I would have missed the end if I hadn't seen Stewart's comment and went back to replay it.