explore alien worlds in search of cursed artefacts.
Submitted by jacobsmith3204 — 2 minutes, 15 seconds before the deadline
Add to collection 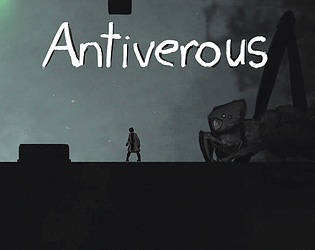 Nice graphics! I included it in my Dream Arcade Archive compilation video series, if you’d like to take a look. :)

Yooo! Wow really like the atmosphere here. The platforming together with the players-coat was awesome. You should expand on this game : )

thanks. i really like animating capes and stuff. just gives a scene of speed and secondary motion that helps the animation feel better. I've done a bit more planing and think that this would be a good demo / tech build for a proper game which I'll try complete and upload to steam.

i didn't have much time to do anything other than a core loop, that being a bit of exploration before a intense chase sequence. and then show it off in a couple levels to cement the idea.

i didn't have time enough to plan any deeper sort of story. (i have a general idea of the direction i would take it) or even some way to play with the formula i created.( like the aliens that i wasn't able to give a proper AI,  abilities or upgrades, weapons that sort of thing).  i planed to have a more in depth fighting system being able to punch things with animated take downs. sort of like mortal combat mixed with assassins creed. the slide was my testing ground for the dynamically generated hit box from the sprite editor i could use for attacks. as you can see from the fact that a slide hurts the aliens and pushes them around i was able to do it. just didn't have time to do the animations for anything to do with the aliens.

but yea definitely am planing on making this a proper game.

Really cool game! I share the same sentiments with wafi. Almost escaped level 2. I think I just suck. :P The art and animations are pretty damn good. I'm bad at art and animation so most of my games are pretty minimal (with almost no animations) OOF. Thanks for letting me play your game. It was quite fun!

P.S. As I was about to post my comment I saw that you submitted 2 mins and 15 seconds before the deadline. I was seriously like "WOAH WHAT A LEGEND". Anyway, good job man! Keep jamming!

yea this took a lot of work.

(animations alone spent 18 or so hours.  backgrounds about 4 hours, the final boss took about 29 hours.(which i had completed by day 4/8)  and the level design for the first 3 levels i crammed into about 9 hours or so on the last day( i had level 4 done first as it was my testing ground for the monster since thats where he shows up)

i had a tab open keeping track of the time left. did the final build 10 minutes before the jam closed, i was worried i might have missed it as i wasn't sure if it had submitted. the actual files were not on the page till about a minute before it closed and when you submit a game with the submit new game button you cant see that its been submitted so i was frantically trying to update the page to find the name of the game to add it to the jam , accidentally clicked on the wrong one, then countdown hit 0, so i went to find the misplaced game and saw that the one that i wanted to add was already there. a real relief at that point as i didn't want 8 days worth of work ending on a 24 hour sprint to Finnish with me not getting to post it to the jam.

Wow...This game might be the best I seen in a jam.Great job I love the art and animations I enjoyed the game play  and all of the design thank you for commenting on my game!!!

im literally just about to upload a post jam build which will have a slightly improved level design and visuals.

also... did you play my batman game?

My criticism: The level design and art were really cool, although the levels were kind of tricky (but it is a video game). I found the collisions to be clunky when wall climbing or jumping onto the edges of platforms.  Good job on the game overall, it was a fun play, and gave me a challenge :)

yea i did 3 of the 4 of the levels in the last 15 hours so there wasn't too much play testing going in to them , play testing would map out the areas where the player would traverse and i could refine the collision shapes so the chance of a bad ledge grab would decrease. which is something ill probably go over sometime in the future.

level 2 has a short long way. one is a lot easier than the other.

i spent 2 days on the level 4 end event, and i thinks its worth the pain of level 2