The Wrath of the MCPCView game page

Defeat the Quantum AI of the MCPC to Regain Control over your CPC!
Submitted by lambdamikel — 4 days, 22 hours before the deadline
Add to collection 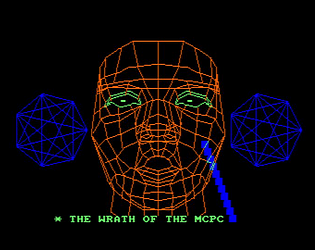 The Wrath of the MCPC's itch.io page

Can this game be played with a joystick?

No, but it would be easy to add. I'll do that after the contest.

Hello, there is now an updated version available: use WRATHJOY.BAS on the WRATHJOY.DSK / .CDT images.

Thanks for updating this. WinAPE did not like my basic controller, but

it did work with my Xbox One controller.

Excellent introduction, and a clever AI.

Thanks! Yes, making the AI drive reasonably well was the most challenging part in making this game. You may have noticed that it doesn't drive randomly, and almost has human level performance. With a bad AI driver, there would be no game, really. And many TRON games fall short here, since random driving doesn't cut it. It has to maintain an internal representation that I am calling a "distance map" which is used to guide the AI driver. Updating this constantly during game play and making sure that the game still runs at a reasonably fast pace wasn't easy, given the performance limitations of pure BASIC.

I am curious.  May I ask one question? Was the game written in PureBasic or other BASIC dialect? Thanks!

It is is written in Locomotive BASIC 1.0, which is the Amstrad CPC's native BASIC (1984 by Locomotive Software Ltd.)

Wow! Many years ago....thanks for explaining. May I ask one more question? "VIC 20 BASIC V2" is in the description of the following game. Is "VIC 20 BASIC V2" also a BASIC language of the same computer? Thanks.
https://itch.io/jam/jam-for-all-basic-dialects/rate/975324

Each of the 80s home computers (Commodore 64, VIC 20, Amstrad CPC, Atari, TI 99/4a) came with their own dialect of BASIC. Many were incompatible. Bill Gates and Paul Allen had their fingers in many of them and sold interpreters to these companies. Some wouldn't accept Bill Gates famous "royalties" and would rather write their own BASIC. Later on, the MSX Home Computer Standard  was established and they all had the same Microsoft MSX Basic (hundred of different MSX machines, all compatible). The game you are referring to is for the VIC 20 (Commodore BASIC). So its different, and without porting / adjusting it, it won't run on machines that are not CBM BASIC (Commodore, VIC 20, ...)

Wow! Thanks for telling me the information of the classic computers in 80's. You really explained clearly! Thank you very much!!!!!!!!

Thank you! Yeah, more is possible with assembler, but I didn't have enough time, this was a bit of a last minute effort ;-) Glad you like it.

Absolutely love that one. This might be a slightly revisited version of Tron (but with a nice catch), the presentation is beautiful! My only critic would be the visibility that can be a bit tricky sometimes. This game needs more people to try it!

Thanks KrakenDev and for the suggestion, glad you are enjoying it! Cheers Mikel