Battle vegetables and vitamin deficiencies in this fast paced arcade shooter!
Submitted by Eli_Scarce — 56 minutes, 53 seconds before the deadline
Add to collection 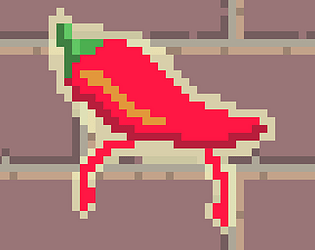 Very simple, but fun to play. The movement could be a bit tighter, but it was playable enough for me to have a good time shooting vegetables. I like the idea that your health is also your ammo! The art style was also very nice, and the music helped to keep me engaged. I would say that it's slightly lacking on the theme(unless I missed something), shooting hurts you but it doesn't really perform worse the more you do it. That's probably something that could easily be added though, and the rest of it is great! As Brainos said, HELL YEAH I'M A GUN AND I'M HERE TO SHOOT SOME VEGETABLES

Thanks for the feedback! At the time it made sense, but looking back I could see how the theme could have been better implemented; the idea was that your ability to shoot was limited the lower your health got, thus hurting your overall performance (since shooting is just about the only thing guns do). Essentially, the more you shoot, the less you can shoot later on, if that makes any sense. Writing it out now, it definitely seems like a bit of a stretch though lol

Nah that makes sense, I think I was able to keep my health pretty high until I messed up at the end and got swarmed and died very quickly XD So maybe I didn't see that aspect of it so much. I still think the health being the ammo is really clever

Simple, controls were fluid, learning it was easy. Reminds me of the Mario Bros sub game from Super Mario World 2 for the GBA.

Thanks for the comment! I can definitely see some similarities ;)

Who knew I had so much in common with a gun? I enjoyed it! Turning up the spawn rates would be great, as it seemed a bit slow, but the controls felt surprisingly smooth!

Glad you liked it! I completely agree the spawn rates could have been better paced. Poor planning on my part didn't leave enough time for more thorough play testing.  Spent way too long on the character movement :/ oh well, there's always next time!

Well the character movement felt nice to me! So at least your efforts weren't wasted!

What did you feel it was missing? This is my first game jam, and suggestions on how I could improve next time would be greatly appreciated :)