This game was great! Can't believe I never played it until all the rankings came out! Took me a round to figure out that I couldn't move rooms while the fire was on-screen, maybe a prompt to tell me to put out the fire would help. That didn't detract from the game though! Great work! 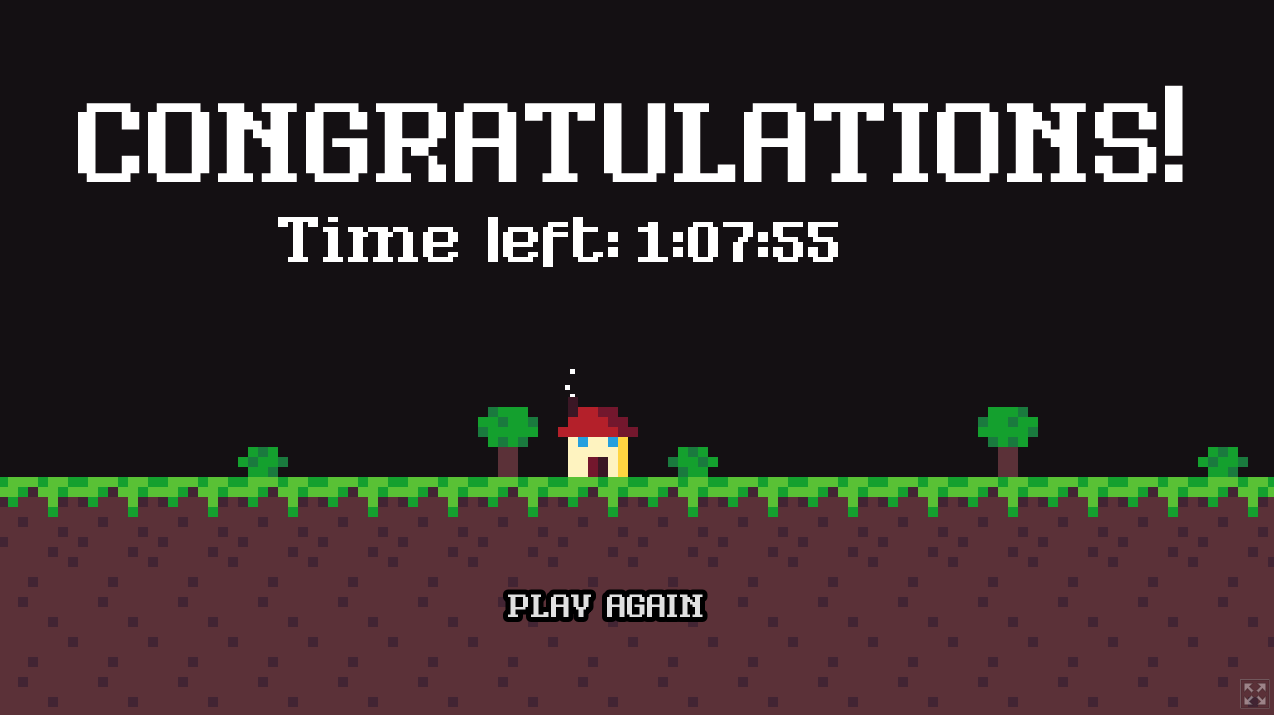 well that’s good it wasn’t too bad! The sensitivity was definitely messed up in the web version, so that probably didn’t help haha hopefully the downloadable game runs better or else I have no idea how AAA games optimize so much!

Despite how short it is, this feels like one of the most complete entries I've played! The ice puzzles also gave me Pokemon vibes, along with the art style! Very cool game with a very unique idea!!

Only complaint I had was the ice sound was a bit loud, but that didn't detract from the game much!

That's odd! Outside the lab is a separate level with not much in it, so maybe the lag was coming from something else. Will definitely have to look into it! Thanks so much for the reply!

Dang! I like this one! The profile picture for it is very nice! I really liked the upgrade system, I just could never get past the first upgrade. Maybe I'm bad or missing something! Lots of potential here!

Dang! I like this one! The profile picture for it is very nice! I really liked the upgrade system, I just could never get past the first upgrade. Maybe I'm bad or missing something! Lots of potential here!

Thanks  so much! It’s probably my fault too that it’s laggy haha didn’t get time to add a modular lading system, so the whole level is always loaded... Was it laggy outside the lab in the desert by any chance?

I got faith in you friend! You are definitely on the right track!

Very interesting game! Despite how it looks, the movement is surprisingly smooth once you get the hang of it! I died so many times on the first level that I had to stop once I beat it haha I'm not a masochist but I know some people are!

Also very impressive you wrote this in vanilla javascript! Props!

I'll have to look into that as well! Thanks for the tip! :)

Aww that's great to hear! I wish you two the best of luck in y'all's endeavors!

Oh! One more thing I wanted to add!

I see some comments about using procedural generation instead of handcrafted levels like you made. Now, I don't necessarily disagree with this. However, I do feel like handcrafting the levels like you have done helped match the flow of the game. For example, on Level 3 when the camera is moving at nearly the same speed as the character, I feel that procedural generation could cause some confusion.

Running from the screen, knowing that one mistake would spell my doom made for intense gameplay! If one platform is misplaced by an algorithm that isn't finely tuned, it could be very frustrating. I think procedural generation is great for more slow-paced/exploration based games, but in games where timing is everything and bouncing perfectly off a platform is important, I think what you did made it much more satisfying.

The first game in the jam to make me cry. Not due to the touching story of a mother dove recovering her eggs in a dangerous urban world like you'd expect though. I cried because of Drone #3 on Level 3. I died so many times to that thing!! Finally managed to beat it though! Thanks for making it easier, saved me from having to smash my keyboard.

The art style was fantastic! Who could've seen such a cute game inducing so much rage?

The controls were very responsive as well! I think adding a "coyote jump" would have made it feel absolutely clean!

Your description for the game was funny as well, tell MyMom.Industries thanks for the quality content!

This is a great one! I feel this game perfectly displays the 8x8 Game Jam ideology through its art!

The difficulty took a bit to ramp up but holy moly did it ram up by the end haha! I got to 21 and just got pounded!

Maybe another turret to work towards would be a good addition!

It took a bit to ramp up in difficulty but it really takes off near the end haha I got swarmed!

Love the art in this one! Character looks like a Charmander in boxing gear! Very cute!

As far as the gameplay goes, I don't really have any complaints! Everything worked pretty much as expected! The animations on the enemies before they blew up on you was great because I could immediately tell what was happening!

Wish it was longer! I was getting into it!

I think there's some great potential here! This is the first game in the jam that I've seen use a dialogue system (that I've played so far) so that was a nice touch! Also being able to buy upgrades to unlock new areas was something I enjoyed!

It was short, however it felt like it is in a place that a lot of levels could be added on!

Only real issue I had was that I almost couldn't find where you were supposed to go once you got all the upgrades. Luckily I jumped off into the void on the right and was able to find it! That might be part of the design, so I can't complain much!

The jump felt a little off as well, but I got used to it after a minute or two so I'm not including that as a complaint, especially because the ability to climb up edges was very forgiving!

Overall I think there is some big potential here! Keep after it!

Glad to hear it man! Keep up the great work!

Loved the opening cutscene! Great touch! If only I was better at platformers haha

This is pretty cool! I feel like I was missing something, like maybe how to rotate the blocks that tagged along with you or something. Maybe I just couldn't figure it out though. Overall an interesting time!

Appreciated the intro into the game that included the 8x8 Game Jam slide! Small detail but I liked the touch!

Loved the game! It was simple but with the attention to detail that you all put in it felt great! Things like the lore and the different characters were all great touches!

The music stopped for me when I fought the pasta, it came back on after that fight though!

I also think the health bars on the bosses are a little misleading, my guess is the slider goes under the border for their health. Makes it look like the boss should be dead when they actually have some health left.

Overall a great entry! Let's get that bread!

I agree with you, to be honest! I think more enemies with less health each would have been better, as the pistol feels pretty useless currently haha thanks for playing!

That's great to hear! Thanks so much! I agree with you on the floor buttons, I tried to put weapons near them since they were kind of hard to see, but I think that might have made it worse lol Thanks for playing!

OOOOOH! I'll have to try that now! Didn't realize you could click on them!

Oh that would be sick! Yeah, I understand running out of time lol

Oh okay, I thought that was the green laser one lol

Oh thank goodness! Appreciate your kind words! Keep up the good work on YouTube too my friend! :)

I gotta say, I'm a sucker for stores in a game! Went through and bought every upgrade and made it to the floor that keys cost 140. Surprisingly addicting for me!

What were the red upgrades for? I bought a bunch of them before they were gone from the store but never could figure out what they did.

Overall I enjoyed it a lot!

Thanks a lot man! Really appreciate it! I'd like to add a sensitivity slider because I'm not sure what happened but it screwed up somehow xD

Hope you were able to equip weapons and press buttons, forgot to turn on the prompt lol

Yeah I bet it was tough lol I haven't even tried for something like that! Thanks for making the game!

Ooooh! It was a bug! That explains it more haha just thought it was an interesting mechanic! Pretty wild they actually ate it away! Must have had a pretty robust system for 'em!

Lmao I got eaten by the monkey like 50 times! The monkey holding the banana sprite was a nice touch! It was a bit tough to figure out how to swing, but I did finally get the button! Could only make it to a score of 10 though lol maybe a little indicator to show the grab range of the banana? Not really sure if that's the best option. Really cute game with a good premise!

I figured it out! It's the left mouse button, just hold it at the right time and you'll grab on! Let me know if you get past 10 points cuz that's the farthest I got lmao

After getting past the installation screen stuff it worked! I feel like the game has a lot of potential! The controls feel a little odd as you keep going forward after you stop pressing the button, I'm sure a sort of sliding effect was what was in mind! It just kinda keeps going though, which makes it feel a bit unresponsive. Getting past the first part was a bit confusing! It was interesting once I found it though, maybe just a little bit of a hint would help as I almost quit right before I found that haha The art is quite good! Thanks for the game!

The menu screen is killer! Love it! I seem to be missing something though as I can't get past the first alien dude haha either their hitbox is a little unforgiving or I'm supposed to do more than just jump. Lotta potential here though!

Very interesting concept! Like Stardew Valley meets Galaga! Had a lot of fun with it! Only thing that made it a little difficult is that the instruction screen never went away, so it was hard to find planet pieces to pick up! The bug dudes did start eating it away so it got better at the end! There was so many of 'em though that I couldn't hold them off haha the little worm dudes are the worst! Great game though with a very interesting mechanic! 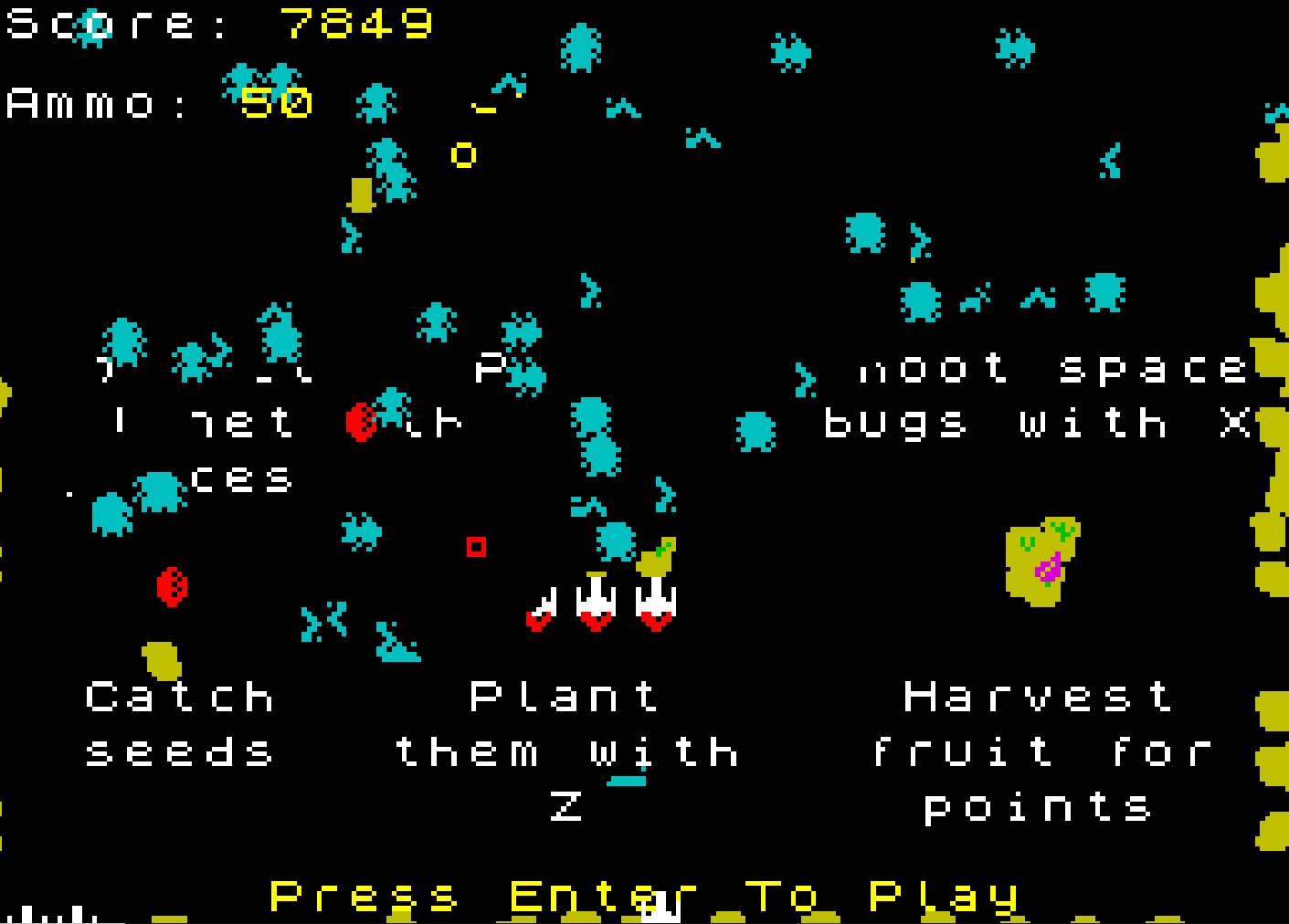 This game has JUICE! Really great! The shop was a nice little touch that made me replay quite a few times! will probably come back to get one of those two-tone colors! Only issue I had was sometimes when you shoot something and you're really close to it it'll kill you. I'm guessing it was an explosion of some sort, but I wasn't able to see it so I'm not really sure. Overall loved it though! Keep it up!

This looks like it could be awesome! I'm terrified of the networking stuff so great job on that! A mode to face an ai would be a great addition for a game jam, just in case there's no one online (my case lol)

Yep, forgot to turn on the text haha thanks for pointing that out! 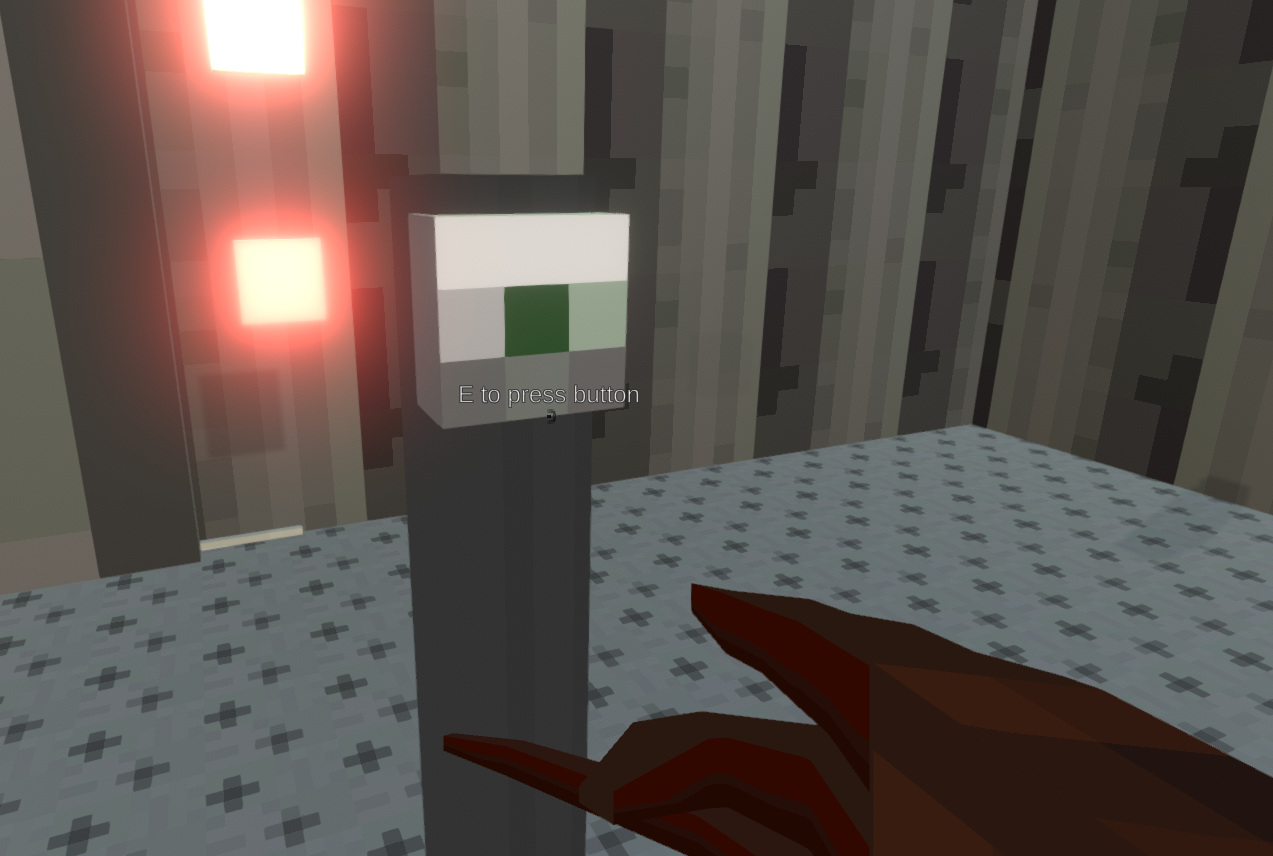