NOTHING TO SEE HEREView game page

A UFO crashed and it is your job to deny everything.
Submitted by alanotoole — 8 minutes, 12 seconds before the deadline
Add to collection 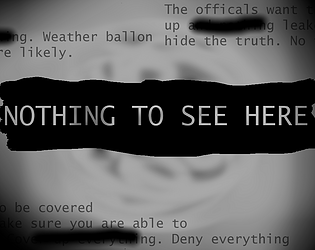 NOTHING TO SEE HERE's itch.io page

It's a shame that your game is in oblivion!

I really think that the overall premise fits absolutely. The music and the graphical presentation is also good.

Only a few things to overwork:

That's it. I don't know how experienced you are in making games, but that was a good one in one week.

Thank you so much for the great review! I love the suggestions.

Good game, loved the premise. I wished however if you could interact with the witnesses more so you can understand them better.

Submitted
Your tools are not
LikeReply
alanotooleDeveloper1 year ago