Don't listen to the AI in this Mini-Game filled race!
Submitted by UltraBot (@UltrusBot) — 14 hours, 59 minutes before the deadline
Add to collection 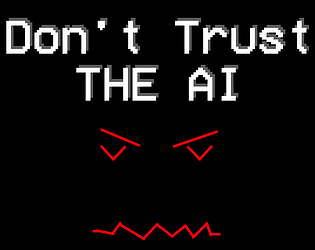 It's a cool and innovative game! But maybe you should make better graphics

Submitted
After a liar's funeral
LikeReply
ShidyGamesSubmitted2 years ago

I don't really know what to think. It's a cool succession of minigames, it follows the theme and there are no issues so far.

But the audio is quite repetitive, player feedback isn't that great (add sounds fx, animations, so the player know when he does something), and there are probably some things to do to make it replayable (like an highscore ).

It's not a bad game, actually it was fun for a few minutes but after this you're pretty done with the game.

Haha, I like this! I actually had to think for a moment at the start of each round to intentionally not do what the instructions said. The "Catch the fish" round got me every time... The addition of time pressure was very clever to make people try to rush through the instructions and potentially make a mistake. Good fit to theme!