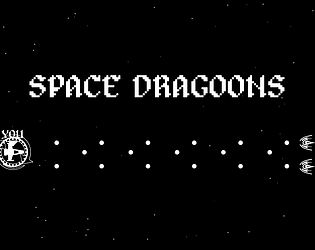 I also needed some time to get used to controls and mechanics - but it was really fun after getting the feel for it. It feels a bit slow sometimes controlwise and it would be nice to have it a bit more easy in the beginning since it’s getting hard quite fast.

I had quite a bit of fun playing the game for a little bit! Art is B&W and the music is pretty neat. Though controls were really weird to get used to. The idea for the mechanics were cool but its a bit much for me at least. You have to learn the controls for all three states you are in and its a little weird. Also, the movement for the ship is like a wet, slippery bar of soap for me. Its really floaty and had me getting into enemy fire alot.

Good job on a submission though! Improvements to these and other thigns mentioned in other comments, as well as adding on to and refining the mechanics would make the experience a lot more balanced and fun. Also, though I didnt play it, the multiplayer is a really rare thing to see nowadays in jams. Cool idea!

Thanks. Yeah like I said I went with floaty for the movement because SPACE. But also we wanted the bulk of movement to be done through the grapple but didn't want to take away movement entirely. For the space ship's movement it's also a little floaty because space but it has stabilizers. I do think it probably would have been better if I just went with direct velocity control so that it was really tight controls and just felt better. The thing about the space ship movement is if you are always inputting a direction you have pretty acute control but as soon as you let up it gets floaty.

The changing states thing is a byproduct of it being multiplayer oriented. It's much easier when you don't have to be responsible for everything and you can have team mates do other jobs. Switching states was worse before cause you could get in and out of the ship with space and switch between piloting and not piloting with f and it was just too much so we tuned it down to just space to get in, automatically pilot if nobody else is, space to get out, and space to jump.

I was a bit lost at the beginning, but when i understood the controls it was really fun ! I've never seen this gameplay before while it's really hard i won't lie xD

The art is cool, the music is perfect for that game, and i love the mechanics of the game !

As mentionned in another comment, the only issue is to understand the controls and the mechanics, but i really like the game and the concept, and i can easily imagine a bigger project on this idea.

Yeah I think after the Jam I'm going to at least add instructions in the start screen so you can try them out without any threat and maybe I'll add a menu you can check for them (won't be a pause menu probably cause networking but still).

Good Game, but it was a bit complicated for me, but if you improve it after the game jam, it would be really good

bold of you to assume I have friends

Overall, I really liked this game, and I think you should consider working on this game some more or using the ideas behind it to create something new. Congrats on a great entry!

We definitely considered creating a small tutorial but ran out of time. Figured it was more important to deliver a finished product, though I solved a few problems by having a begin button at the beginning so that you could kinda mess around without any real threat. My plan for a tutorial was to have each part of the game explained, an enemy that doesn't shoot at you, a pickup to bring back to the ship, how to heal the ship etc.

As for the feedback on hit, definitely should have had some animation/hitflash/damage noise/particle effect. Definitely want to make it feel good to play.

A few other notes: The controls might feel a little loose but I kind of wanted that effect since it's space, but I find that while giving constant inputs it feels pretty good and when letting go it kind of drifts which was neat but maybe not the best experience. I'd considered making the controls super tight which would probably feel ultimately better. I've definitely had that problem of having to refer back to the game page for controls myself, so I'll try to remember that next time.

One last bit is it's pretty obvious that the single player experience suffered due to the multiplayer and we should have made it more additive than reductive, but we would have missed out on the cool interaction between the players and the main ship. Flying the ship, then jumping out to grab loot, and then jumping back into the ship is incredibly difficult for a solo player, especially as the difficulty ramps. And of course the ramping difficulty into infinity is kind of a cop out for real gameplay design but I felt it was fine for this jam.

We also should have added in a credits section, I'm noticing a lot of people did that. The art is from game-icons.net so we can't claim that unfortunately mostly. The music was hand crafted though.

The game was very nice to play, if it was a little hard to control all the elements that are.