Save the princess !View game page

Submitted by tomo ge — 2 days, 19 hours before the deadline
Add to collection 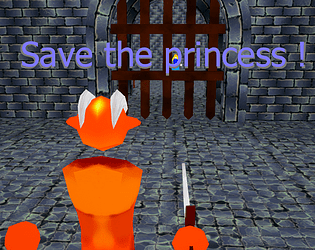 Save the princess !'s itch.io page

sometimes i would walk into a room and enemies would just be standing there, not doing anything.  Also I can't tell if enemies are actually hurting me. When you play with AI companions they just kind of get stuck and stop moving at some random point.

But this seems pretty solid. Would love to see some more variety with weapons/spells and stuff, and I have no idea what the little potions actually do. Great work though, keep it up!

I mashed the dodge button quite a bit and eventually went out of bounds. Checkpoints would be nice. Keep up the good work though!

Hey! Played your game on stream, just wanted to recap some of my feedback -

This game seems like it would be a ton of fun at a party to just plug in some friends and have at it. Have you considered looking into some procgen dungeons, for endless replayability?

The combat needs some variety - most enemies just kind of snap to facing you and attack. Being able to properly dodge telegraphed attacks would be nice. It felt like you were sort of forced to take damage from some enemies, but maybe I just suck at the game!

Is there a health indicator I missed? I found myself pretty stumped as to whether or not I was near death most of the time, or how much good the potions were actually doing.

Otherwise fun to play. The AI allies were unstoppable! Until they fell in a pit, that is.