Build a deck of chess moves and beat up some goblins. 7DRL prototype
Submitted by j4nw (@_j4nw) — 1 day, 18 hours before the deadline
Add to collection 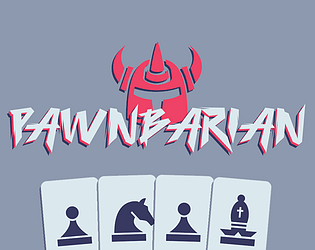 I have just seen a video of this nice game in the channel of CubicDisco.

found no bugs and this a plus !

Pretty damn good. Would like to see  more of this.

Fun little puzzle! Not sure how easy it would be to expand, but perfect for its scope.

Beautiful! I can't wait for a proper release!

Had a lot of fun playing the game.  And I agree that the exploding squids feel a bit too punishing in early game. Hope you'll expand on the idea because I think this could be taken a lot further.

Interesting concept. Fun to play.  It's a bit too easy since you got infinite turns.

Please note the embedded game has been updated since 7DRL. You can find the original v0.0.1 release in downloads

This is a great execution of a clear idea! I had a lot of fun playing it. Also, three thoughts while playing:

1) it would be a huge quality of life help if you could tell which "damage squares" were being generated by which enemies (maybe hovering, maybe color coding).

2) balance-wise, I think the exploding squid/clouds should be introduced later in the game. Each squid thing takes a whole turn to kill safely, and that's only if you're in the right position--meaning that having lots of them early can really stretch out how many turns the player is passing, just waiting for safe cards.

3) also, it felt non-intuitive to me that killing the last enemy on a level doesn't instantly end the round...leading me to a "feels bad" defeat at the hands of one of said exploding squid.

Also, small provocation -- there seems to be no reason to limit this mechanic to a tiny grid! I would totally use this "hand of chess pieces" mechanic to move around a big dungeon.

Thanks! All of this is very valid criticism and stuff that's up there on my todo list :)

Re using the system to jump around a larger space, this is something I already pondered and it's definitely something to explore. For now I'm comfortable within this constricted 5x5 space both scope- and mechanics-wise, and feel like there's a lot of design juice to be squeezed out of it, and the restriction is more helpful than harmful. Surely an idea to revisit in the future, though.

Indeed. It seems like you really sliced off the perfect amount of scope for this challenge. :) And it sounds like you're super pumped to continue the development, which is super cool. Thanks for the response!