Search the topological maze, find the amulet on the 13th floor.
Submitted by patrickdavison — 8 hours, 59 minutes before the deadline
Add to collection 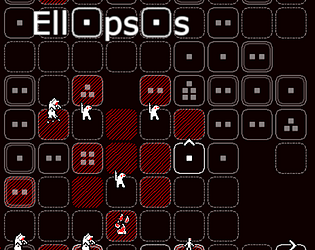 This is a super interesting mechanic! My favorite that I've played in the jam so far! Definitely have my thinking cap on now for where this mechanic can be taken...very clever!

Hey! Thank you so much for playing and for the kind words. I also have some plans about where to take the mechanic -- different tile types, etc. Glad you liked it!

I enjoyed this games of yours.  It felt at times that you had to take a chance and may end up in a poor situation due to randomness outside of your control, but I may just need to learn the game better because as I played I was able to reduce these instances.  I did have times where I would spawn on a level with no choice but to take damage, which can be frustrating and seems entirely out of the player's control (see screenshot below).  It took a while to figure out all of the mechanics while dying along the way, a quick tutorial (even written) could go a long way for player retention.

I think it would be helpful if the player was given a little more information, particularly map boundaries, tiles that don't exist but are in your vision, and for QoL to reveal the tile under a wraith since it can be deduced from their threatened tiles already.

One thing I couldn't quite figure out is how new monster generation works, and also what it means for a tile to have the double wall around it (it seemed like this would show up after stepping onto a tile for the second time?).  I guess there is still more for me to learn here.

Overall quite an enjoyable game, thanks for making it  :-)

Hi - thank you so much for playing and thank you for your comments. All your points about the game are well made, especially the very clear need for a tutorial. I was surprised after I got the basic mechanics programmed how many tricky decisions there were to make about visibility, given that there isn't really a traditional "line of sight" with the structure of the maps.Your suggestion about Wraiths is a good addition to that.

Monster generation is randomized per level according to static probabilities, plus new monsters spawn after a threshold of turns, which gets shorter and shorter.

And your screenshot is so painful to look at! I knew that the level generation algorithm was too loose, but thought that the tile swapping ability sort of "covers" for the majority of bad spawns...but that combination of tiles, blanks, and fire you got below is really punishing.

Oh! And double walls on tiles just signify "you've been here before" it's to help you figure out which paths you haven't taken if you're stuck navigating a tough level.